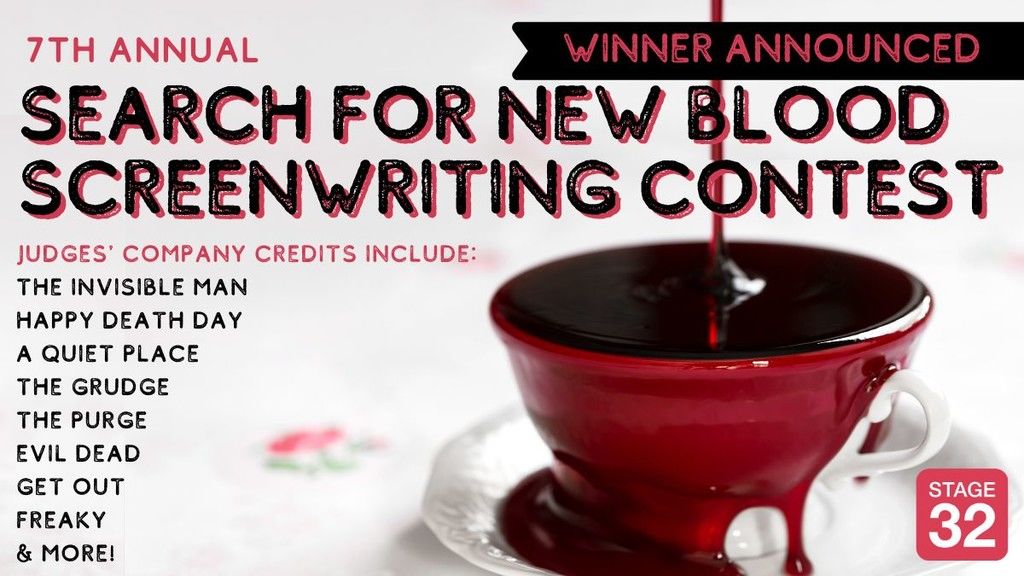 SCROLL DOWN TO SEE!!!

The most respected genre screenwriting competition of the year is back!

Do you write horror, thriller, or suspense? Around the world, these are still some of the most sought after scripts in the market! Now, Stage 32 is bringing you the biggest names in genre film production and distribution to judge your horror and thriller scripts!

Never before has a genre screenwriting contest brought together judges from the six leading horror production companies in the business! These companies have produced the most critically and commercially successful horror and thriller projects in recent history.

Now - exclusively through Stage 32 - you have the opportunity for executives from these prolific companies to read your script and meet with you privately in Hollywood!

This is the first time ever these powerhouse companies, executives, and filmmakers have been assembled together for one screenwriting contest!

We have brought in another all star panel of industry judges including:

We’re looking for the next The Invisible Man, Halloween, Us, Brightburn, Midsommar, Crawl, Escape Room, The Dead Don't Die, The Lighthouse, A Quiet Place, The Purge, Truth or Dare, Get Out, Hereditary, or whatever horror or thriller concept your twisted mind can dream up.

Never before have the biggest horror producers in the business been assembled to judge a screenwriting contest! We're giving one deserving screenwriter the opportunity of a lifetime. Our Grand Prize Winner will be flown out to Hollywood for one-on-one private meetings with each of our judges, who come from the most prolific horror production companies in the business!

Plus ALL our finalists will have their material exposed to a full list of industry executives.

2018's Grand Prize Winner - Christina Pamies - was signed by Jake Wagner off of her winning script, A Good Deed! She has just been hired to write the Horror Thriller BAGHEAD for StudioCanal!

Please note this contest is for full-length screenplays only. No short scripts or teleplays will be accepted.

"I’ve never experienced this type of support from any other person or screenwriting contest out there. I can’t imagine having a better cheerleader in my corner."

Darren Lynn Bousman is the film director, producer, and screenwriter, best known for his work on the SAW franchise and the horror musical REPO! THE GENETIC OPERA. He was the co-writer and director of SAW II and the director of SAW III, SAW IV and SAW IX.

He directed an episode of the horror anthology show "Fear Itself", entitled "NEW YEARS DAY". He has also been attached to direct the remake of David Cronenberg's SCANNERS. In 2019, it was announced Bousman would return to the SAW franchise directing SPIRAL, the ninth installment in the series which is set to be released on May 21, 2021.

Lindsay Schwartz is the Director of Development at Fully Formed Entertainment, the new venture from Brad Fuller and Andrew Form, who co-founded Platinum Dunes with Michael Bay in 2001. Both Fuller and Form are the producers behind the hit film A QUIET PLACE and sequel, as well as THE PURGE franchise, OUIJA, A NIGHTMARE ON ELM STREET, and THE AMITYVILLE HORROR. Fully Formed Entertainment's latest project, THE FOLLOWER is set up at Paramount Pictures.

While at Platinum Dunes, they produced both film and television. Notable series include Black Sails on Starz, The Last Ship on TNT, and currently, Jack Ryan, Amazon’s most-watched show. On the feature side, they are responsible for some of the biggest genre films of the last decade, including The Purge franchise, the Ouija movies, and the Teenage Mutant Ninja Turtles movies.

In August of 2019, Lindsay joined Form and Fuller when they left Platinum Dunes to create FullyFormed Entertainment and signed a three-year deal with Paramount Pictures. They are eagerly anticipating the release of A Quiet Place 2, and are developing numerous features and series with studios such as Paramount, Sony, MGM, Universal, and Amazon, amongst others. Before FullyFormed and Platinum Dunes, Lindsay worked at Paramount Pictures and Happy Madison Productions.

Felipe Machado is the Creative Executive at BECK/WOODS the company from writers Scott Beck & Bryan Woods, the screenwriters behind the massively success A QUIET PLACE franchise and the upcoming Sci-Fi Thriler, 65 for Sony with Adam Driver starring.

Previously, Felipe was at Raimi Productions, a development and production company focusing on a wide range of projects, from horror, to romance, and everything in between. Under the leadership of writer, producer and director, Sam Raimi, Raimi Productions specializes in unique stories by writers and filmmakers who stray from the expected and forge their own paths. Raimi Productions’s latest release was 2019’s smash hit CRAWL for Paramount. Prior credits include THE GRUDGE, DON'T BREATHE, POLTERGEIST (2015), DRAG ME TO HELL, and EVIL DEAD.

Before Raimi Productions, Felipe worked in development at Ridley Scott's company, Scott Free Productions and has a background in screenwriting.

Previously, Jonathan was the Development Executive at Jordan Peele's Monkeypaw Productions. He sits at the frontline of all incoming projects and development, and assists in shaping and managing projects as they move into the production pipeline. Previously, he worked in the TV department at CAA and in development for Kenya Barris's production company.

Brittany Klesic is Development Executive and horror connoisseur at Monkeypaw. She ran point on Candyman and The Twilight Zone for CBS All-Access. Prior to joining the company, Brittany worked at Blumhouse Productions and as professional script reader at various companies.

Michael Besman is the Head of Development at The Arts District a production company formed by Eli Roth and Roger Birnbaum. Eli Roth is the director and producer behind films including CABIN FEVER, HOSTEL, GRINDHOUSE, THE LAST EXORCISM, DEATH WISH and HAUNT.  Birnbaum is the Co-Chairman of Spyglass Entertainment and the producer behind GLASS, UNBREAKABLE, and DEATH WISH, among others.

Michael was previously the Vice President of Production at TriStar Pictures, and Vice President at Gruber-Peters Productions. As part of his current duties, Michael runs motion picture and TV development for The Arts District which has a deal at Spyglass.

Ken Korba Jr. is an Executive in Distribution at Universal Pictures. Previously, Ken worked at Brillstein Entertainment Partners, Principato Young Entertainment (Artists First), Paradigm, Open Road Films , Global Road, Entertainment, Crypt TV, and Focus Features.
Universal Pictures is responsible for some of the industry's most recent critical and commercial horror successes, including THE INVISIBLE MAN, GET OUT, HALLOWEEN KILLS (2020), THE HUNT and LILITH.
Ken's background is in talent representation, development, production, theatrical sales, and film campaigns. Ken specializes in working with screenwriters to improve their story's structure and their character's literary regression.

Jake Wagner is one of the top selling spec script managers of the last decade, having sold the largest spec script in history, SNOW WHITE AND THE HUNTSMAN. He is the owner of Alibi Management, and formerly was with Good Fear Film + Management and Benderspink. Jake’s clients have written some of the most popular recent horror films including POLAROID, CRAWL, .

Jake began studying screenwriting and film while a student at the University of Michigan. Jake began his career as a manager at Energy Entertainment, before moving to BenderSpink, and later Good Fear.

Jake enjoys working with writers, who have fresh, original stories to tell. Writers who are not afraid to put in the hard work that it takes to mold an idea into a screenplay that can sell and get produced.