Filmmaking / Directing : What is it like being a independent filmmaker? by Christopher Molek 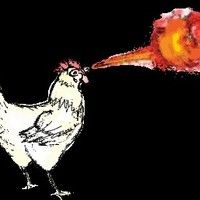 Hello to everyone who will see and/or read this post. I'm new to this site, and I think it's very interesting so far. I'm a high school student (I'm I too young to join this website?) and I have worked on film making for a few years now. I love almost everything to do with it. I have a good number of semi-satisfied projects done, including my first short film made recently, and even more failed projects. I studied and worked on a lot of aspects of the process of making a short films, and I took it very seriously in the past. Possibly too seriously, since I hit a few to a couple of breaking points if you wish to call it that. After that I before relax more and trying to find a balance of how much should I work on film making, but I still battle with the same question almost everyday, and that is a film making career, job, whatever you what to call it, right for me? Before you start writing how hard it is to be a independent film maker, I've done my research on this with many sources mixed in with my own and close one's ideas, philosophy, opinions, etc. Yes, it is hard. Almost seems like fairy tale at times. I get really heartsick and bitter sometimes when tackling this question. I bring myself down with my lack of confidence, anger, and sadness. It's a mess. I've been finding ways to cope or avoid them, but they will come back if don't at least have some sort of guidance or whatnot. Even if it's a bit. I have read a great book called "How to Find Fulfilling Work" by Roman Krznaric, and it's probably the most useful thing I read so in my life, and biggest ways to find that "Fulfilling Work," is to experiment and actually try a job. I have only worked with a couple of friends on these film projects, so it's pretty much just a hobby and nothing as serious making a living as a independent film maker (if that's even possible). I'm pretty much alone with this question since none of my friends are as serious as me about film making and they just want to help/support my projects, which I'm very thankful for, but this question/struggle is still unresolved, and perhaps it will always be. If anyone has some sort of experience on film making, and would like to voice out their film making advice, stories, goals, etc. I'll gladly listen. I don't expect for anyone to solve my issue, but I will be very grateful for any shed of light in that dark tunnel of mine. And please, I prefer you don't say stuff like "follow your dreams," or "never give up." That just makes me feel bad and guilty about myself most of the time, but I shouldn't dictate people in how they talk to me. That just makes it worse. So....yeah...if you read this then thanks, and say something if you wish.

Is it right for you? Only you can know or find the answer to that question.... Maybe the real question is : can you earn a "decent" living as a filmmaker in Chicago and in what role?

Dear Christopher! Not too long ago, your question was an extremely actual one. But we live in an amazing time, when there are a lot of various ways to make a living from filmmaking. Yes, it's not easy to make good films and simultaneously to seek for the ways how to turn your activity into money. But... No matter which way you choose - filmmaking or something else - it will be hard anyway! So, the real choice in your case is to have hardships, doing what you love, or to have hardships, doing what you hate. P.S. Add the link to your YouTube channel in your bio. I found it and subscribed, but I was too eager to do this. I'll try to help you, posting the links to your videos on FB.

Christopher, I was a was a teenage filmmaker too, in another era where I had only 5 books on the subject, no internet, and a wind-up camera using 8mm film lasting only 3 minutes and 20 seconds, yet costing a weekend of odd jobs to buy. I was no less serious about it than you sound. I get it. At the time, I only knew 1 other amateur filmmaker, a pen pal who lived 2,000 miles away. We were odd ducks. Seemingly no one had our interest. Today you have the advantage of a generational love of film and an understanding of it process, plus access to superb reliable tools, as well as the internet. But you have the disadvantage of everyone trying to do their own thing too, which can seem overwhelming as you work and stumble and grow... feeling on your own in a field of others with possibly similar struggles. There are also so many opinions and technological changes it must be overwhelming to try and sort. Try to think of it simply... you have creative desire, and it takes time to develop that into realization of works that satisfy you. Even frustrations can be built on... without the struggles, great works have seldom been made by anyone! Everything you do or experience can benefit your filmmaking indirectly. You can get a job at McDonalds and get character inspiration from customers that wont get used for another decade. It all counts. Keep journals of thoughts and experiences written by hand. That is so very old school but invaluable. A good book to read for all creative people is THE ARTIST'S WAY. You need to develop patience and know most filmmakers ( most , not all, but most ) do their best work in their 30s, 40s, 50s and 60s... even though people are preoccupied today with instant youthful success. It's an unrealistic burden to stress you out. Shed it. And "success" has many faces. In my own journey, I left filmmaking almost entirely for 15 years as an adult, and met with my first professional successes only after that hiatus of major growth. Do not be discouraged, and if you feel "too serious", that's not a bad thing, but taking breaks and other diversions are a very good thing. One last thing... am I a success? Not to me, not yet. But that's cool.. and I keep going, but only as and how I want to. Filmmaking is your individual journey, Christopher, but it's not really a destination. Enjoy the ride as you make your own, custom map.

Thanks for everyone for helping me out with their own advice! It makes feel better with myself, and I totally agree with your point, Royce, that by doing pretty much anything helps to build up your craft of making films, including a job at McDonalds. I feel like I could only really make short films that are based or somehow related to my expresses. Like for example, how can you make a film about being happy if you don't know what makes you happy? And I guess that's the same for artists. Yes, I do need more patience. As a teen I feel a huge critical point is about to happen soon. "The bird leaving the nest," but I guess I will keep going what I doing that works for me and see what happens. This is all good advice from all of you. I feel like before and after this advice that I'm straying away from film making as a "job," and more into having a job that allows more time for film making. A great poet did this named Wallace Stevens, and it does not sound like a bad idea. Hartman, I agree that only I can make that choice. After all, everyone knows themselves better then anyone else. I will put some research in that 2nd question. Ekaterina, thanks so much for having the time and put in finding my channel! (that glorious wallpaper) And I will put the link in my bio. And Royce, "The Artist Way" looks like a good read, and I might get it. Yet again, thanks for the help from all of you.