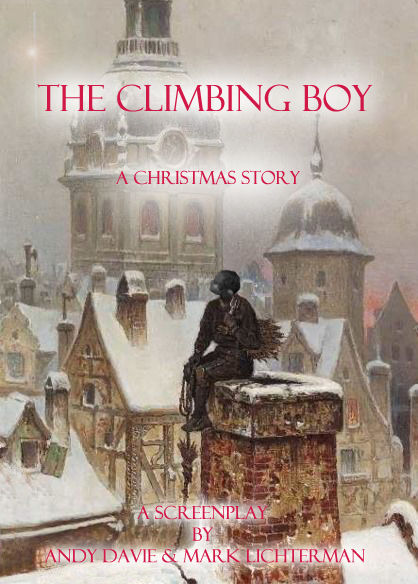 THE CLIMBING BOY
By Andy Davie

Forced to crawl through the chimneys of 19th century London, an eternally optimistic small boy struggles to survive his tortured existence long enough to see Christmas, touching the hearts of those he meets that Christmas eve and what may prove to be his last day on Earth.

The tale of a small boy, Zachariah, a so called apprentice to a mean spirited chimney sweep, Master William Johnson. Zachariah's seemingly unending suffering and exploitation does nothing to diminish his cheerful, hopeful and loving outlook. His special, touching spirit doesn't go un-noticed by those he meets on his travels. Aware of Zachariah's plight, someone is watching over him from the shadows, someone who will change his existence forever.

It’s Christmas Eve 1905 in Boston Massachusetts. Five year old Stephen is enthralled by his Grandpa telling him Christmas stories before a crackling fire. Stephen is touched in particular by the story of Zachariah, the climbing boy who became one of Santa Claus’ helpers on the Christmas Eve of 1843 in London.

Eight year old Zachariah the climbing boy, or chimney sweeps apprentice, suffers a hard enough existence for any child, a life made harder still by his master, William Johnson, a drunken brute of a chimney sweep. Yet Zachariah never seems disheartened or dispirited. Wherever he goes, young Zachariah brightens the lives of all but the meanest of the people he meets in 19th century London.

We follow Zachariah on that gloomy Christmas Eve, experiencing the hardship of being a climbing boy and meet the people he encounters along the way: the charitable factory foreman Mister Archibald, Marcos the cheerful fishmonger, the angelic Lady of a house with her young son Albert, a generous confectioner and the mean old mister Hobbins, a cruel, penny pinching undertaker.

We also meet an unhappy magician, ‘Garibaldi the Great’ and witness how the morose magician’s strangely magical hat comes into Zachariah’s possession.

While we follow Zachariah and his master on that eventful Christmas Eve of 1843, we also see that someone else is watching over them, a stranger who always seems to be in the right place at the right time.

The stranger proves to be Saint Nicholas, or Santa Claus, whose mission becomes clear when he rescues Zachariah from the clutches of Master Johnson and takes him on to be one of his magical helpers.

Never again to go hungry or cold, Santa Claus leads Zachariah into the magical night and we return to 1905. The story ends with Stephen placing a star upon a Christmas tree for his Grandpa Albert, who once lived in London back in 1843 and met a young climbing boy, a sweeps apprentice named, Zachariah.

For reviews of the novel 'The Climbing Boy' by Mark Lichterman check these links.

Seeing as you've said such nice things, I trhink that I'll put a professional review right here, right now: Review: The Climbing Boy by Mark Lichterman September 26, 2009 by workinggirlreviews the-climbing-boyThe Climbing Boy By Mark Lichterman Metropolis Ink (c) 2003 Buy Link: http://www.amazon.com/Climbing-Boy-Mark-Lichterman/dp/0958054363 After reading the synopsis for Mark Lichterman’s THE CLIMBING BOY, I wasn’t really sure what to expect. I felt pretty certain the story would educate me on the dreadful working conditions of young orphan children sold into apprenticeship in the 1800s, but what I didn’t know was the depth of feelings this enchanting little story would evoke in me. At just 180 pages, THE CLIMBING BOY is a short novel that is anything but short on plot. Orphaned at the age of four, Zachariah is sold into apprenticeship to a chimney sweep for the cost of back rent owed on his late mother’s flat: a sum of one pound. Thus begins his life as a climbing boy. The life of a climbing boy is grueling and perilous, not only in the immediate dangers of being suspended by a rope harness and lifted down into zigzagging, sometimes stories-high chimneys, but also in the long term ill effects of breathing in soot and chimney dust on a daily basis. Add to that Zachariah’s master’s cruelty and you will find a boy’s life that is much more an existence than a childhood. Even so, eight-going-on-nine-year-old Zachariah maintains a positive outlook on life and a sweet disposition that makes him a favorite with many of his customers. Set in London, England in 1843, the bulk of the story takes place in the span of just one day — December 24, the day before Christmas. The tale begins with Zachariah awakening from a beautiful dream of his deceased mother’s love to enter into the reality of his now bleak and loveless existence. Throughout the day, the reader follows Zachariah and his master, Johnson, as they go about their work. Turning the pages, the reader feels a full spectrum of emotions (the terror of being suspended in a chimney that sways precariously in the wind, the heartbreak of a child being denied a gift he really wanted, and the joy of a stranger’s kindness to name but a few) as the story builds to a delightful, fairy tale ending. I found myself drawn deeper and deeper into the life and heart of this wonderful character until he truly felt like someone I knew and loved. The cruel Johnson is equally well drawn, and though I hated him at times, I couldn’t help but feel sorry for him in the end. That’s how talented a storyteller Mark Lichterman is. His poignant fictional details blend with the hard truths of what, sadly, was reality for many children of that era, to create a beautiful story that, while being educational, is also sweeping and unforgettable. I highly recommend this heartwarming tale to anyone who enjoys seeing the good guy win. I know I certainly did. –Honeybee fiveshoebanner4

Hey Mark, some guys (Tony, John and Danny) have correctly pointed out that the logline is not a logline as it stands, should have stuck with what we had before or something closer. What is there at the moment is more of a pitch, than a logline. My goof, but I'm about to fix it... watch this space :-)