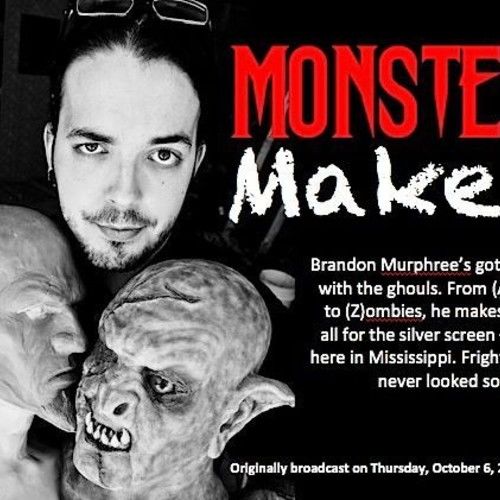 You don't need a mysterious disease to turn you into a zombie.

Murphree, a Tupelo native, is one of the top special effects make-up artists in the area.

From ghouls to zombies to aliens to everything in between, Murphree can create it, out of sculpting clay, latex, foam and other tools.

"I like monsters. They're so much fun," the 23-year-old said. "I like something completely detached from humanity."

He was fascinated by dinosaurs, especially after seeing "Jurassic Park."

"I remember being blown away by the special effects. It just blew my mind," he said.

When he was a few years older, he watched the Arnold Schwarzenegger alien movie "Predator," with his mom's friend. A young Murphree was creeped out by the alien.

"He told me, 'Oh no, it's fake. Somebody built that in their garage.' And then it dawned on me that I could build dinosaurs. I had the best of both worlds," he said.

After his high school graduation, he enrolled in Tom Savini's Special Make-Up Effects Program at the Douglas Education Center in Pittsburgh, Pa. Savini is a special effects legend, having worked on films such as "Friday the 13th," "Dawn of the Dead," "Creepshow" and "Texas Chainsaw Massacre II."

While there, he worked with his idols, including Savini and Academy Award-winning artist Dick Smith, who worked on films like "The Exorcist," "The Godfather" and "Amadeus."

Now, Murphree works out of his kitchen, creating monsters and creatures for big and small projects.

"I have this table where everything is confined. I have prop axes and ghoul-y guys like that," he said, pointing to his monster.

He has a few day jobs to pay the bills, but he always has a creature to create. Later this year he'll work on a zombie movie in Chicago, for example.

He also teaches workshops on special effects make-up; one of his most recent workshops was for the Tupelo Film Festival.

Murphree can do just about anything on a film set, from grip to sound to lighting to camera - "I'm just a pair of hands," he said - and he can do cosmetic make-up.

Most recently, he has branched out into directing, working with Tupelo director Glenn Payne on "Zion." But special effects make-up is his first love.

-As written by Sheena Barnett