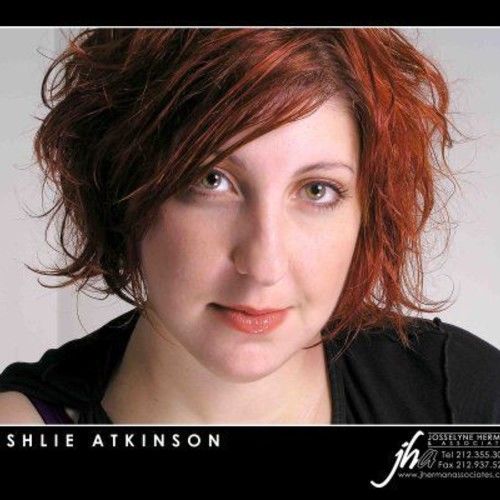 (from Wikipedia.org)
Ashlie Atkinson (born August 6, 1977) is an American stage, film, and television actress.
Atkinson was born in Little Rock, Arkansas. She moved to New York at age 17 and attended Barnard College. After a year, she returned to Arkansas and graduated from Hendrix College in 2001.
She was seen by director Jace Alexander in New York when she performed in a Neighborhood Playhouse school showcase, which led to her appearances in Law & Order and Rescue Me. While on hiatus between the 2004 and 2005 seasons of Rescue Me, she starred as Helen, the sweet-faced, plus-size librarian in Neil LaBute's 2004 play Fat Pig, for which she won a Theatre World Award for 'Outstanding Off-Broadway Debut', as well as receiving nominations for both a Lucille Lortel Award and an Outer Critics Circle Award. She appeared in a Broadway revival of The Ritz in 2007, as well as Second Stage's 2007 production of "The Butcher of Baraboo". In 2009, Atkinson was cast by Sam Mendes in The Bridge Project, in which two Shakespeare plays (performed by a cast of British and American actors) were taken around the world for an 8-month run, eventually landing at London's Old Vic.
Atkinson's film and television credits include Inside Man, Rescue Me, the Law & Order "trifecta" (L&O, Criminal Intent, and SVU), Louie, The Invention of Lying, Eat Pray Love, Bored to Death, Another Gay Movie, and All Good Things.
Atkinson was one of the founding members of New York's Gotham Girls Roller Derby, where she skated under the name of 'Margaret Thrasher'. She still announces for the league and does play-by-play commentary for broadcasts of the sport.