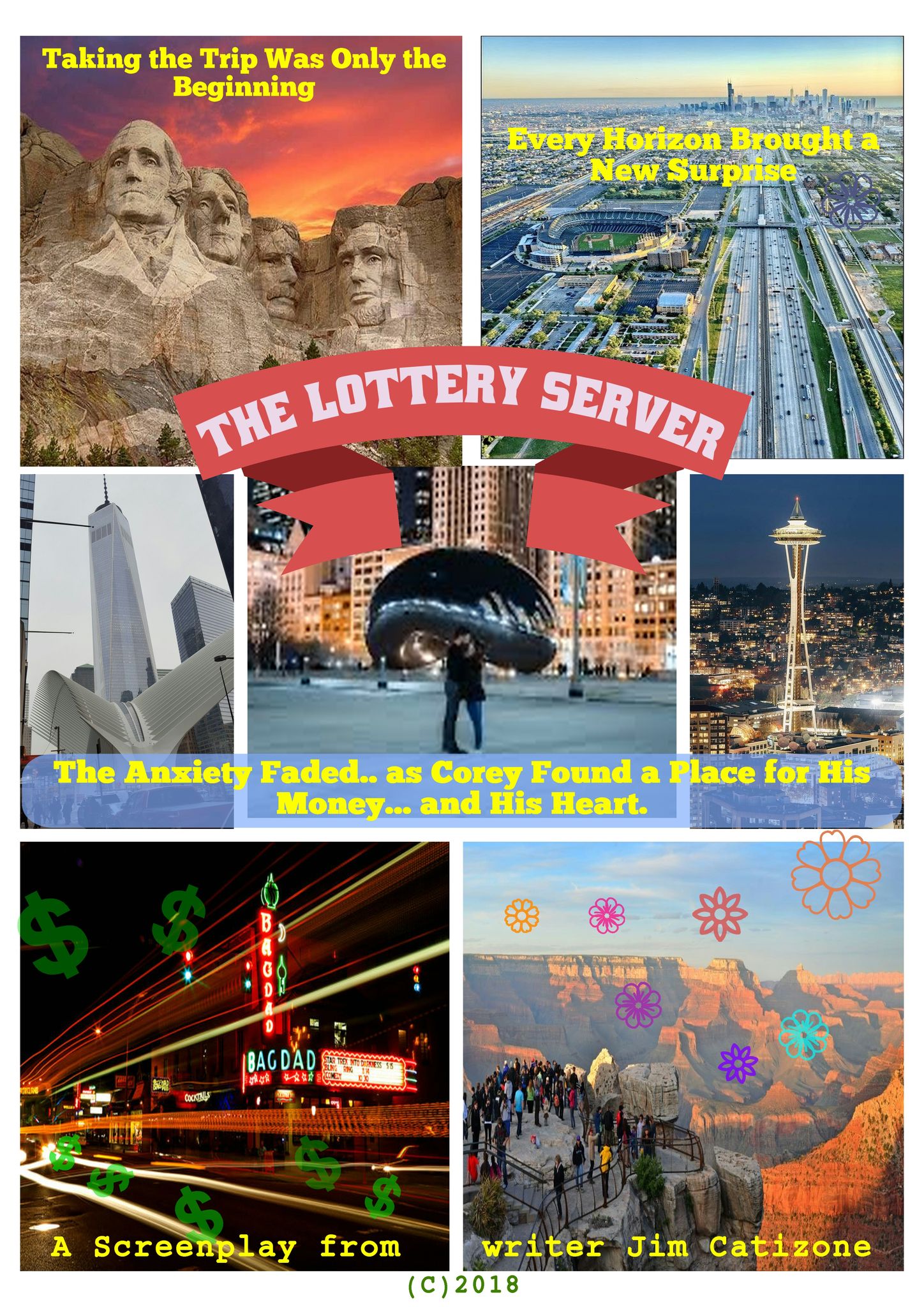 THE LOTTERY SERVER
By Jim Catizone

A waiter in need of some self discovery, wins the lottery and travels across the country, sharing his wealth and his heart.

Corey, a seasoned server, wins a ridiculous amount of money, when he plays the Pennsylvania lottery. After being ecstatic, the anxiety of the money takes hold of him.

As his 'friends list' explodes, he plans a cross country trip, to get away from, and contemplate this new found popularity.

Five months later, he sets out on his trek. His route takes him through many new places. He visits towns and locations, which he previously couldn't afford.

Corey's empathy towards his servers, distracts from the anxiety which the winnings brought him originally. What starts as large cash tips, soon turns into a more official, 'who can I make this out to?'

The further away Corey gets, the more he relies on his strong connections back home. His Uncle and Accountant Tony, acts as the voice of reason and balance, when Corey loses focus. His nephew Kenny, the logic as to which direction his career should take.

Corey's best friend Olivia, compels him to be reminded of his friends at home. While they both struggle with the loneliness in distance.

On his way through Chicago, Corey meets Afton, a successful and intriguing Marketing Representative. They instantly find connection, while he tries to keep his winnings hidden from her.

As Corey continues his trip, his generosity increases, with the depth of each server's story. Eventually, his 'Good Samaritan' ways get noticed by a news reporter in Portland, Oregon. She begins a quest to track down his path of generosity, utilizing Social Media.

Corey's relationships with both Olivia and Afton add both confusion, and a crisis of heart to his already pondering thoughts.

Afton meets Corey for a long weekend in New Orleans. They spend a few great days together, as she earns his intimacies and affections. Afton goes back to Chicago, while Corey returns to the highway.

With focus on starting a business after his trip, he considers what his generosity could bring to many. He starts to feel that he is becoming a person, of which he could be proud of.

As the trip heads back to the Northeast, Corey makes a stop in New York City to see his ex. Alexis, the outgoing and animated near supermodel, enjoys the visit from Corey. She subtly makes it known that she'd be more than happy to reconcile.

On the last push of his trip, Corey juggles his love for two women, a clear future, family & friendship and his social responsibility moving forward.

Eventually, Miranda Kelly tracks down Corey for an interview. His story is shared across the country, as he is returning home.

After much deliberation of conscience and heart, Corey settles on a target.

Corey utilizes his wealth to better the lives of his friends & family. As he unveils his new business... 'Good Samaritan Brewing Company', he offers an opportunity to share its profits with various charities.

The Lottery Server is a story of a man finding his way in life with the relationships he already has, the new ones he begins to build, and the inner one within himself.