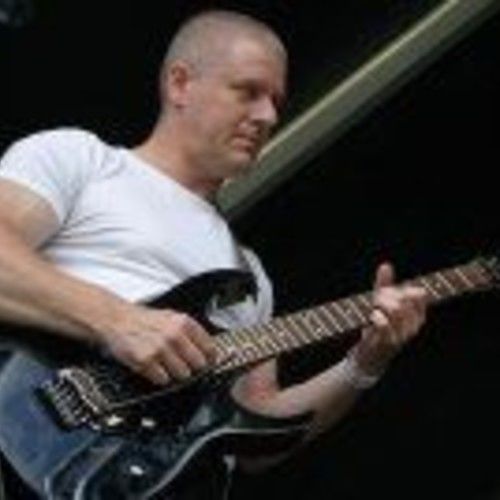 Recently upon hearing some of Chris’s music the legendary Uli Jon Roth stated;

When Chris was a boy, his Godfather, Roger Newell, was playing bass for Rick Wakeman of Yes, and Chris was taken along to rehearsals and gigs exposing him at a young age to the beauty and excitement of the rock music world. Although his first instrument was the drums, and at 8 years old he had the opportunity to play them with The Who at Wakeman’s studio, he felt drawn to the guitar and switched instruments at the age of 12. Throughout his school years he would lock himself away in his room for hours and become Jimi Hendrix and later another idol David Gilmour.

After leaving school with an award for outstanding achievement in music Chris worked at Boilerhouse studio’s in High Wycombe where he was involved in recording some of the UK’s top artists, including Howard Jones and The Sex Pistols, to name a few.
In addition to his recording and playing expertise Chris also became close friends with Wal, (the maker of the infamous Wal Bass Guitar), who made instruments for many top musicians, enabling Chris the opportunity to play guitar with many of these top artists throughout the 1980's, including;
Paul McCartney, Phil Collins, Rick Wakeman, Howard Jones, Lindisfarne , and more…

All of this acted as a huge musical influence on the young Chris Adams and his music can be described as modern rock with influences from the classic rock era. A virtuoso guitarist and much of his work features guitar from Classical to rock.

Now based in The Highlands of Scotland Chris is involved in all aspects of the industry and works in partnership with Xponorth. Chris was well received at Belladrum festival the past few years and continues to record and write great music.