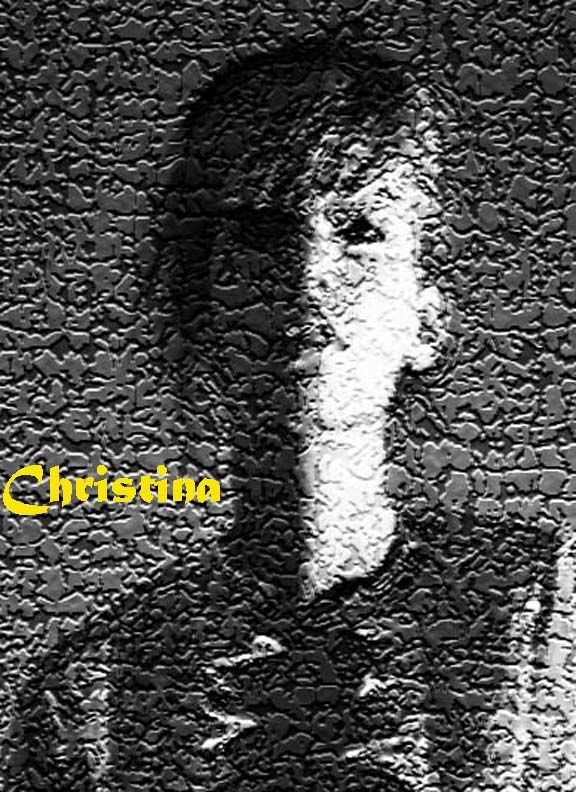 Christina possesses the ability to slip from one era to the next and the intellect to survive against the villains attempting to end her life, but when FBI analyst Larzon tracks down, he believes she is a cold-blooded killer or the love of his life.

1917 in the Southwest, Christina, (20s, energetically curios, Elle Fanning-type) mysteriously appears from a beam of light right in front of the rancher, Thomas McCarthy. Because of her age and beauty, he believes she is the right candidate for anything he desires, especially to bare his children.

Christina prepares to exit her little hellhole. First, she finds a stash of cash of over $40,000.00 from bank robberies. In a drunken stupor, McCarthy crashes through his front door. He grabs a .44-caliber pistol, but she summons her inner strength and the weapon discharges.

Realizing McCarthy's two brothers will retaliate, Christina leaves a note where Burt and Curt can find her. Upon reaching a mountain cabin, the men spot sticks of dynamite. She takes dead aim with a Sharps rifle and blows up the log structure. She then dissolves into the history of the early 20th Century.

Today, FBI Agent Bent Larzon, (20's, compassionate, Liam Hemsworth-type) investigates frozen homicide cases, dating back 150 years. His great, great grandfather was one of the sheriffs covering the 1917 McCarthy case; so he had heard about the brother’s murders, which were never solved.

In the evidence frozen case box, Larzon lifts out a 1917 bromoil picture of Christina in her wedding dress and takes notice a beautiful woman with long flowing hair.

Next, Larzon investigates a frozen case from the eve of the Civil War. He discovers an old tintype picture with the exact likeness of Christina. The FBI analyst begins to investigate that perhaps the incidents he discovers may possibly be linked.

Larzon’s sister, Xanadu, (late teen's, attitudinal, Liam Hems worth-type)), tells him that when she worked in Lexington, Massachusetts for the Saxon family, she saw a life-size painting of Christina from the Revolutionary War.

When Larzon takes a field trip to New England, he discovers the painting of Christina was stolen, but Grandmum Saxon produces a snapshot resembling an exact likeness of his subject only dressed in Revolutionary soldiers’ attire.

Back at FBI headquarters, Larzon uncovers two more pieces of evidence and pictures from World War II and the Tet Offensive from 1968 in Vietnam where Christina appears to have taken out the human garbage. The FBI analyst pieces together that his young woman of interest seems to be justified in killing three evil men at a time and on the eve of every major historical conflict.

Later that evening in a news report, Larzon catches a glimpse of Christina as a wounded journalist being medevacked from Afghanistan to a USA hospital base in Europe.

Realizing she may be his investigation subject, he heads to Ramstein Germany, USA Air Force Base Hospital to interview her. But when he arrives, the journalist has disappeared.

This sets off a chain of events leading Larzon to track down and uncover Christina's story. He discovers that possibly through reincarnation, she was born many millennia ago, as the illegitimate daughter of Zeus.

Larzon suddenly snaps to his frozen case assignment! Is he tracking down a cold-blooded killer or the love of his life?

Christina’s father, Zeus, teaches her the skills to eliminate men of bad intent. From the safety of Mount Olympus, she falls in love with the shepherd man, Larzo’Opali.

Before the couple’s union is blessed, three Nomadic brothers murder Larzo’Opali for his flock of sheep. Christina then kills each assailant – one with a stone from a slingshot, the second with an arrow from a bow, and the third from Zeus’s bronze spear.

But now Christina has lost everything. The youngest daughter of Zeus begins her journey to wander Earth. For her to break the cycle of endless sadness and perpetual loneliness, she must become open to FBI Agent Larzon's affections and fulfill her desire to become a wife and mother.

Coming full circle, Christina and Larzon marry than raise their two children on the same Southwestern ranch she landed on a century ago.