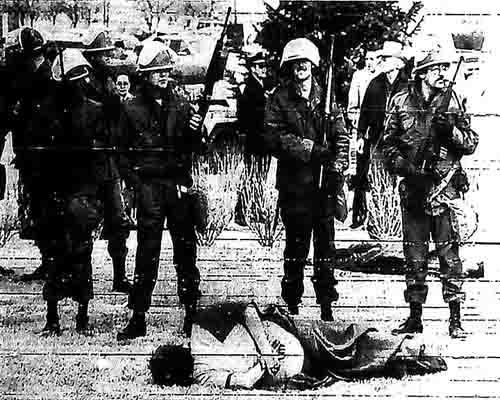 The TV videographer, Candle, willingly entered the worst penal riot in the history of the United States, and before the smoke cleared, the photojournalist witnessed dozens of inmates savagely mutilated.

Xaviér Fierro, I heard you were burning the joint down.

Cuate, somebody had to do it.

With the drop of a gavel, a judge sentences Xaviér Fierro (late teens, attitudinal, Cristian de la Fuente-type) to life in prison for his involvement in the murder of a liquor store owner. The young Hispanic accepts the severe sentence rather than turn in his friends knowing the code of the street is a death sentence for snitches.

Through bravery and prison hits, Xaviér displays a complete sense of loyalty from his gang brothers earning him respect and fear with the inmates at the New Mexico State Penitentiary. A decade later, he and his lieutenant, Brutipo, lead the largest Latino gang in the joint – The Mexican Mafia.

Inside the prison, the Mexican Mafia and the Aryan Nation position for control of the lucrative drug, gambling, and black market trade with the rest of the population cowering in fear of the brutal predators.

As a hardened “lifer”, Xavier (now late 20’s) rules the Hispanics. Wolfgang commands the Aryans brothers. Both remain in constant conflict over the smallest gesture, the slightest attitude, and the inmates’ unyielding code of justice.

But the worst and most unjust issue at the prison grinds forth as the illegal “snitch” system, which the administrators incorporated to favor inmates with favors by ratting out fellow inmates. This will ultimately prove a disastrous and tragic end for many prisoners inside of the facility.

At the approach of the 1980s, the prison advocate, Dueñas, testifies during legislative hearings that the prison reaches a dangerous flashpoint. He foretells that the predators inside the facility will pile high a dead pool of victim

Legislators and the Governor remain deaf, dumb, and blind to the approaching maelstrom of human suffering and carnage currently happening just 10 miles south of Santa Fe, which is a Mecca for artists and tourists of the Southwest USA.

February 2nd and 3rd 1980, Candle trades his safety for the lives of the hostage guards and willingly walks inside a prison-under-siege to report the news story of a lifetime. Xaviér and his lieutenant Brutipo also save the TV newsman by threats from the Aryan Brotherhood.

Candle’s teacher will be the lifer Xaviér. The two men's stories play out against the brutal backdrop of the worst prison riot in US history.

When the National Guard takes back the facility Candle stands before the blackened prison. He realizes that the flames and smoke will most likely never be extinguished.