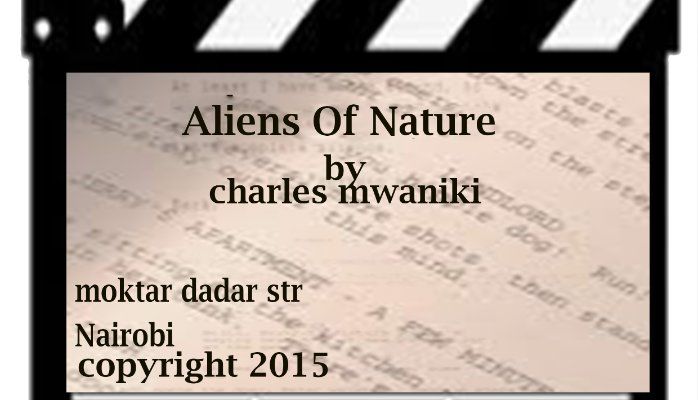 ALIENS OF NATURE
By Charles Mathews

When greed come crushing on mother nature’s only left tree, nature wakes to life in realization of a teenage girl’s efforts to rescue it. Would it not be strange if it is against the odds of human perception except her!

There once lived a beautiful girl in love with nature who desired to become a great journalist though her family was poor. Her name, SHOWER. Shower’s father MILLER was a charcoal burner something that she tirelessly detested. Her mother GLACIER was a fruit vendor. Shower kept advising his father to instead plant trees opting them to become a re-birth of new generation of rainy, erosion free and aerated climate, till one day nature heard her cry!

That very morning, being the only tree left standing, Miller went down to cut it. To

his horror the tree incredibly turned against him. It bitterly grabbed his axe and brutally

scared him away for his dear life, something that made him comply with his daughter's

advice. The girl started a nursery as a tribute to nature. She planted a lots of seedlings

which they distributed. Nature was happy; the land was covered, rain fell, the air got

refreshed and the earth instilled. To their reward, nature began its journey: the trees bore

fruits which her mother sold. The seedlings grew thicker and the community gladly bought.

They made enough for her school fees, but something strange happened; she couldn't be

the girl she wanted until something strange happened!