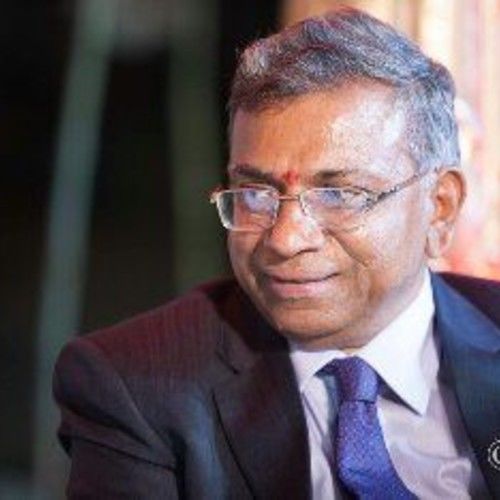 Born in a 2 acre poor joint family with 10children and 6 adults in a remote village in Kadapa District, A.P, (INDIA) to illiterate parents in a sudra Community (Hindu). Had worked for SC-Christian and also Brahmin teachers in their household cleaning utensils etc., as guru bhakthi in exchange for getting free tuition during Primary school education. Merit scholarship holder from 9th class to M.B.A (IIM-B). Was class first through out upto B.E. Completion, A.C.C. School leader and school pupil’s leader. Organised strikes on moral and social issues besides organizing Cultural activities during school days. Was liked by the students, teachers and public during school days. He is a B.E. (Gold Medallist) in 1973 from the Andhra University and a M.B.A. (IIM-B-74-76 batch) / PGDM. Never took loan or favour from anybody during entire education period /life (favour) to the best of his memory. He is married and have 4 children, 3 engineers (including two children with M.S. from USA pursuing higher research / working in USA and another engineer entrepreneur pursued management education in CANADA and working there) & a B.Com graduate pursuing civils. Did several experiments in personal life, government service, private service and as an entrepreneur. Brought up the family in spite of severe odds as mother, father and teacher.

He was appointed ENQUIRY OFFICER during 1999-2000 on C.F.O and Executive Engineer which case was connected with a 1963 batch Indian Administrative Service (IAS) officer and he had the courage to give his enquiry report uprightly which was accepted by the government of A.P. resulting in balanced punishment to the delinquent employees.

He has the uniqueness of seeing abject poverty to Board room sharing positions with higher echlons of life on public forums with several Ministers, MPs,MLAs and IAS officers at the same time following simplicity, accountability, generosity, transparency and deliverability.

C. Venkataramanaiah - is an Electronics & Communications Engineer with University First & Gold Medal in 1973 from the Andhra University. He is also an MBA (PGDM) from the IIM, Bangalore (1974-76 batch). He has about 30 + years of successful Senior Managerial experience in all facets of Management, Entrepreneurship, Industry Promotion and Consulting. He held CEO responsibility for production, turnover and profitability in Public and Private Sector Companies with hands on experience in productivity improvement, quality improvement, restructuring and turn around. He started several initiatives for industrial development and industry promotion in A.P. State(INDIA)during 80’s based on his personal professional skills. He has received several awards in academics and service. He has hands on experience in brand creation and promotion and marketing and sales management. He has also hands on experience in HRM, Corporate Management and Business Planning. Expert in Technology forecasting and planning. He received D. P. Agarwal Rolling Trophy for Best Effort in Internal Market Development by a Commercial establishment for 1987 from Federation of A.P. Chambers of Commerce and Industry (from the Hon’ble Chief Minister). He was short listed for Marketing Man of the Year award by Institute of Marketing and Management in 1988. He has considerable hands on experience in Project Finance - both at lending institutions and at borrowing institutions. Was visiting faculty at JNTU & IPE(HYDERABAD,INDIA) in Business Management. He had given part of Management Development Programmes(MDPs) during 1986 and 1987 to four batches of very senior Indian Administrative Service (IAS) Officers(at the level of VC&MDs numbering about 120) from all over India on Government’s invitation, besides giving MDP’s to Senior Executives from private and public enterprises. He was a member of Board of Directors / MC of STPI, Hyderabad for a long period. He had guided a number of entrepreneurs in starting and managing their enterprises. He was a director on the boards of several Companies.

Guiding and advising the promoter MD who is a first generation technocrat entrepreneur on more or less all matters – Human Resource Management , Organisation Development, Project Finance, Marketing Organisation , Corporate Affairs, Administration etc.(like preparing project report and helping MD in getting soft loan of Rs 4 crores for Commercialization of LIVE LED display board technology of the company from Technology Development Board, Government of India etc.)

Training B.Tech students and Professionals in Embedded Systems, VLSI, Wireless Communications, Power Electronics, PLC’S and soft& professional skills besides career counselling. The center used to train about 900 students drawn from 100 engineering colleges from all over India - in a year on a self sustaining basis in national development. Students from engineering colleges in A.P. , Tamil Nadu, Kerala, U.P, Bihar , Punjab , Maharastra, M.P, and IIT Gowhati, IIT Kharagpur, IIT Madras, MNNIT Allahabad - did projects / trained at the center.

A start up wireless Internet Company.

Guiding IT and ITES industry development in Andhra Pradesh and Tamil Nadu to start with and later for A.P as one of the directors on the board / MC Member.

Guiding and Advising the promoter MD who is a first generation entrepreneur and also the Board on Corporate Management, Project Finance, HRM and OD, Corporate Affairs, Administration etc for the company on request. The group is in the business of electrical infrastructure industry involving electrical transmission and distribution for various state electricity boards. They are also into Mini-Hydel power projects and Mining (for project technicalities and advise on request).

Visit link : APEL.pdf file for citation from FAPCCI and photos.

Marketing Assistance Programme- Organized marketing assistance programme of APEL from conceptual stage achieving about Rs 4 crores turn over during 1988 resulting in receiving DP Agarwal Rolling Trophy from Federation of Andhra Pradesh Chambers of Commerce and Industry( From Honable CM of AP) in 1988. The material given in citation will highlight the nature of responsibilities and achievements. Please visit the link APEL.pdf file - given above.
Projects: Was also in-charge for project promotion, project appraisal, monitoring and disinvestment of projects in APEDC (during later period) Industrial Estates- Was also responsible for industrial estates development, allotment, administration and later for closure and handling over to other Government Departments(some of them) subsequently.
Enquiry Officer: He was appointed enquiry officer on C.F.O and Executive Engineer which case was connected with a 1963 batch Indian Administrative Service (IAS) officer during 1999-2000 and he had the courage to give his enquiry report uprightly which was accepted by the government of A.P. resulting in balanced punishment to the delinquent employees.

5. Director on the boards of several Companies