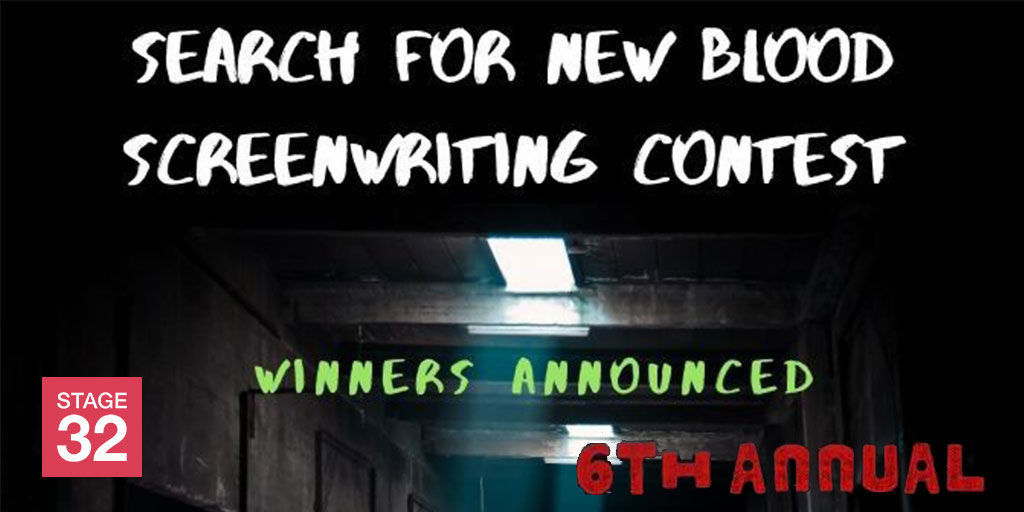 THE GRAND PRIZE WINNER HAS BEEN ANNOUNCED!

The biggest genre screenwriting competition of the year is back!

All finalists loglines mailed to hundreds of industry executives!

When floors creak and door knobs rattle at midnight...and strange sounds echo through the air...whenever lightbulbs flicker and you feel a cold whisper on the back of your neck  — that is when you know it's that time of year...

We have brought in another all star roster of industry judges including:

We’re looking for the next Us, Brightburn, Midsommar, Crawl, Escape Room, The Dead Don't Die, The Lighthouse, A Quiet Place, The Purge, Truth or Dare, Get Out, Hereditary, or whatever horror or thriller concept your twisted mind can dream up.

We're giving one deserving screenwriter the opportunity of a lifetime. Our Grand Prize Winner will be flown out to Hollywood for one-on-one private meetings with each one of our prolific judges!

Plus ALL our finalists will have their material exposed to a full list of industry executives. Last year's Grand Prize Winner - Christina Pamies - was signed by Good Fear Management + Film off of her winning script, A Good Deed!

Winners and finalists from the last 5 contests have been produced, signed, or are in development. How's that for opening doors and creating opportunity?

**Please note this contest is for full-length screenplays only. No short scripts or teleplays will be accepted.

For an additional fee of only $49 (50% savings!) you can receive coverage (1-2 pages) from our industry readers on your screenplay or teleplay. Just check "coverage" upon checkout.

Stage 32's executive team will send out your screenplay title, logline & writer bio to over 500 development executives, producers, managers & agents who work with Stage 32. If an executive requests the script or a meeting, we will facilitate.

ALL TOP 10 FINALISTS will have their screenplay title, logline & writer bio sent to over 500 development executives, producers, managers & agents who work with Stage 32. If an executive requests the script or a meeting, we will facilitate!

"Since winning the contest, Stage 32 has set me up on a bunch of meetings. I've met with a bunch of Creative Executives who have given me a lot of great notes on my script and have given me some really helpful career advice. Last week, I met with Chris Bender (Producer - The Ring 2, Final Destination) and Jake Weiner (Producer - A History of Violence), and we had a very detailed notes meeting on my script. I'm in the process of working on a rewrite and hopefully will get it in a good position to sell! So it's been a great experience. I think Stage 32 is a great way for writers to get their foot in the door and get their career on the right path. I would recommend their contest to anybody."

"I have nothing but high praise for the folks at Stage 32. Because of meetings they set me up on I am now working with Mike DeTrana from Anvil Entertainment, have director John Poloquin from Grave Encounters 2 attached to my script, and an option for financing from Three Point Capital. One of the meetings was with Daniel Bekerman, the producer of The Witch. I wrote a horror screenplay and I got to talk with the producer of one of the greatest horror films the last decade. That's got to be viewed as something good. He didn't agree to produce the film, but he did offer his company to assist us with securing grants and tax incentives if we shot up in Canada. Again, that's a pretty damn good measure of success for a contest."

“It’s surreal. It’s changed our work life and we’re working in a professional realm that we’ve never worked in before. We’ve been struggling writers for a long time and when we found out we won, we were super stoked. Stage 32 put us out there on a bunch of meetings with production companies, managers and agents. We signed with HG5 Entertainment and are writing 2 scripts, which 1 is going into production this year. It’s changed our life.”

"Speaking as a screenwriter to all my fellow writers, I highly recommend submitting to any and all Happy Writer's Writing Competition. I came in 2nd in the Search for New Blood Horror competition and it at very least exposes you and your work to industry professionals. To get that kind of eyes on something you've written, whether you end up selling your screenplay or not, is a great experience. All my best to all!"

"My only wish was to find this site sooner for the sake of saving time, discovering in-depth educational value, and making legitimate connections. I have to tip my hat at RB and the gang for changing the game and helping shape my future in filmmaking. I’m honored to be swimming in a community of like-minded individuals. I’m proud to be Stage 32’s HAPPIEST WRITER right now!"

- Frank Ponce, Stage 32 Happy Writers Search For New Blood Contest, 2014; Signed with 3 Arts Entertainment and his script has been picked up for development by Atlas Entertainment (The Dark Knight, American Hustle)

The Stage 32 Happy Writers Search for New Blood contest is not associated with The Blood List.

Shaked Berenson is a producer of over 30 films and serves on the board of the Independent Film and Television Alliance, alongside members Paul Hertzberg, Roger Corman, and Avi Lerner.

He was the Co-Founder and COO of Epic Pictures, a film, production financing and sales company which acquired the Horror site, Dread Central, an online publication which reviews all things horror. The acquisition created the Dread Originals horror banner for Epic.

Prior to Epic Pictures Group, Berenson served as Renegade Pictures’ Director of Sales as well as the Director of Technology and International Relations for the Giffoni Hollywood Film Festival.

Previously, Scott worked at Benderspink for founding partner JC Spink and Head of Management, Jake Wagner. Prior to his work at Benderspink, Scott was an agent at Paradigm.

Ethan started in the film industry on the cult hit “From Dusk till Dawn” written by Quentin Tarantino and directed by Robert Rodriguez. He worked on such visionary films as Desperado, Sin City, andPlanet Terror with Bruce Willis. Ethan went on to  Recent credits include Hands of Stone, starring Robert De Niro, the horror film Feral, and Kidnap starring Halle Berry, as well as numerous indie films in Latin America and China.

Antonio is a Literary Manager at the production and management company Circle of Confusion, whose company credits include Mayhem, "The Walking Dead" and "Fear the Walking Dead."

His clients films have played at Cannes, Sundance and SXSW, among others.

Antonio was previously in the Picture Literary department at APA. He then moved to Plattform, a management company led by veteran genre manager Jeremy Platt who's client credits include It for Warner Bros., and Guillermo del Toro's The Shape of Water.

Stephen Gates is a manager/producer and a founding partner of Ellipsis Entertainment Group which represents leading thriller & horror filmmakers including the writer of the award-winning film Extremely Wicked, Shockingly Evil and Vile starring Zac Effron and Lily Collins.

Previously, Stephen was the Head of the Literary Department at Evolution Management the company that discovered and produced the billion dollar SAW franchise for Lionsgate.

His client Darren Lynn Bousman is the director of the #1 film in America SPIRAL starring Samuel L. Jackson and Chris Rock.

Rob Rose, a United States Navy veteran and award-winning filmmaker, groomed his way thru Hollywood by way of the stand- up comedy stages. After spending time on tour as a professional comedian, he found his true calling as a Writer.

In 2018, he conceived of and co-wrote the tech wary horror film, “APParition”, starring Kevin Pollack and Mena Suvari, which was presented at the 2019 Cannes Film Festival and will be distributed by Voltage Pictures in late 2019.

As a proud Navy veteran, Rob supports (VME) Veterans in Media and Entertainment, and is committed to hiring fellow industry veterans on his projects whenever possible.