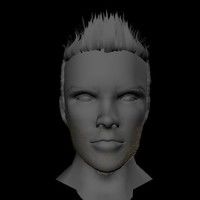 Just thought I'd write a post about this since I've had issues of program compatibility with my project. It's in this topic because I can't find one for computer animation. Keep in mind that I'm not a CGI artist, I write and act as Production Manager, but I don't use any of these programs and this is what I've gleaned from actually dealing with this issue (and asking around the web). This is more of an FYI for anyone looking for computer animated effects in their work. If you look around the web at CGI modeling software, you see 5 main programs that are used: 3DS MAX (used primarily for video game development), Maya, DAZ 3D, Cinema 4D, and finally Blender. Most programs are compatible with each other if you're talking about transferring 3D Objects (i.e., the actual models, themselves a collection of polygons shaped to look like a chair, a human female, what have you), and that includes being textured (or "painted" for lack of a better term). Even that's not 100%, though, Cinema 4D for example doesn't transfer it's models in Blender well, we had a problem with our Summer Glau character model where all her textures were white outside of her face. It's been corrected, but that's because another modeler reapplied the textures in Blender. The compatibility problem really exists for rigging (i.e., building a virtual skeleton onto a model thus making it easier to animate) and animation. As I understand it (and mind you, I'm not a CGI artist, I'm the production manager for our group), they're not really compatible at all. In fact you can't transfer a fully rigged model or a rendered animation from one program to the next. Just doesn't work, the software programs don't support each other. Now there is a way out, and that's using a COLLADA file extension, which is specifically designed to transfer models, rigging, etc. from one program to another. Seems to work fine with 3DS MAX, Maya, Blender, and DAZ 3D, the problem, again, is Cinema 4D. Even using the COLLADA .dae file format causes that "white-out" problem I mentioned earlier. And it's also a problem for anything other than simple animations or rigging: if you're doing anything complex, it's just not gonna work. So the bottom line from all this is that you can have a variety of CGI artists using a bunch of different programs to actually create the models for your computer animation. That's not an issue. But when you've got to animate? That means sticking with just one program and having a team using just that program. Or, at least, that's the state we're at. If anyone knows any ways around this, by all means, feel free to yell at me.

My personal animation preference is Motionbuilder. As long as the programs all import/export the FBX file format, you should be okay. I plot (bake) my animation in MB, save the animation only as FBX, then import it onto the actual rig in Maya or Max. Never really had many problems other than having to redo some attachments (I.e. a character holding something). Hope that helps.

We have several 3DS MAX users, actually, so this could be very helpful. Thanks for the tip!