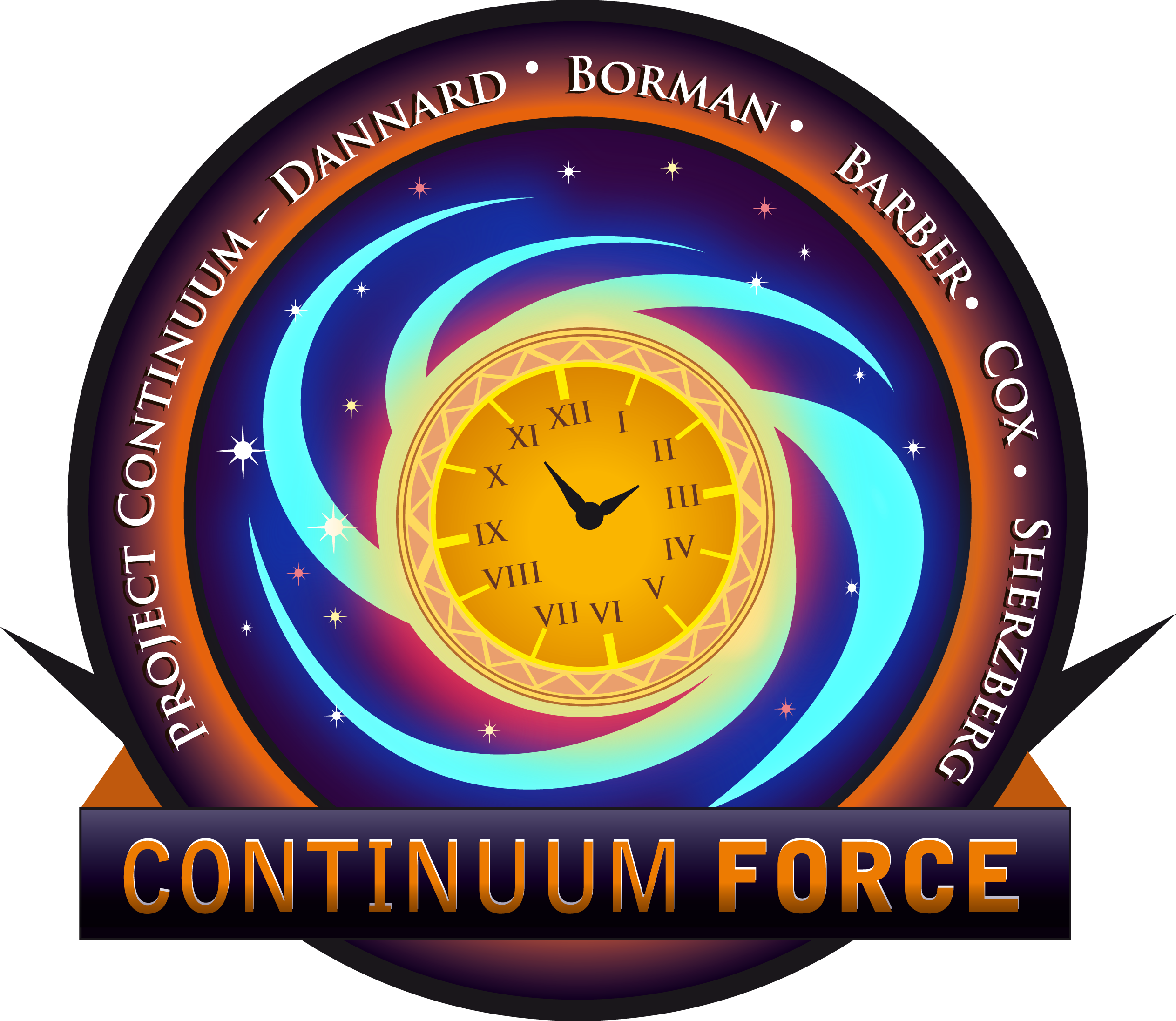 A team of quirky time travelers must save our reality from aliens trying to change history.

The story opens with a decorated black ops soldier, Lt. Colonel Connor Dannard (a Brett Dalton of Agents of S.H.I.E.L.D. type), facing a military board of inquiry for having disobeyed a direct order from a superior officer. While Dannard’s actions were morally correct he was still insubordinate. He is informed that he is being transferred to an isolated base in Montana where he’s told “people go to die”. He expects that he is destined to live out the end of his military career in obscurity pushing papers and handling minor guard duty.

When he reaches the base Dannard discovers that he has actually been chosen to command the crew of the top secret Project Continuum. Civilian and military members have been working for years to unlock the secrets of time travel using reverse engineered UFO technology. The ship is ready, the crew has been chosen, but they have yet to find a commander who can pass the rigorous testing process established by Dr. Alala, the project leader.

While Dr. Alala and the base general are busy worrying about how Dannard will pan out, he’s secretly worried about the rest of the team. The team’s cosmic string theory scientist, Lesley Barber (think Karen Gillan of Doctor Who), is a certified genius, but quite young with a ton of scientific theories and absolutely no real world experience. Eli and Shiran Herzberg are husband and wife archaeologists who can only function and work through problems if they’re fighting with each other. That poses a problem because only Eli will be going on the time travel expeditions with his wife staying behind at the base. Former NASA pilot Buzz Borman (think Kurt Russell type) thinks he can do everyone else’s job better than they can and is angry that he’s not being given command of the ship. Add to that the fact that the ship is controlled by an AI computer with a mind of its own and a tendency to speak Russian at the most inappropriate times and the whole thing looks like a disaster waiting to blow up in Dannard’s face.

To Dannard’s surprise, though, he passes the final test and is given command of the ship. Tensions are high as the team prepares to leave. They will have a small window of time to observe the historical events before having to return to their own time, reappearing a second after they seemingly left. If they can’t make the trip back then they could be lost forever. Those remaining behind are equally on edge. They will continue to live their lives for the hours that the ship is gone, but those lives, those actions, will be overwritten and lost when the ship returns.

Under strict orders to only observe the crew embarks on its first couple of missions. All of them are disappointed that they’re not visiting big moments in history or trying to uncover great mysteries. In truth the events they’re sent to witness seem rather mundane and Dannard gets a sense that the base general might be hiding something from the rest of them. Dannard’s suspicions are confirmed when they catch a brief glimpse of what looks like another ship while they are on a mission and return home to discover that some small, inexplicable changes have occurred leaving the crew of the ship and the staff of the base with two distinctive, separate sets of memories for events that all had experienced. When it becomes obvious to all that somehow history has been rewritten while the ship was away, the general comes clean with the reason behind the missions they’ve been going on.

Over the past year doctors at army hospitals the world over had started reporting a weird phenomenon. Soldiers emerging from comas or extended sleeps after severe head trauma had been waking up with memories that differed from those of their comrades. Some even woke up speaking languages they had never learned and claiming citizenship of countries other than their own. Within an hour or two of waking, though, these strange memories faded and were replaced with memories in line with those of everyone around them. When the number of cases rose high enough to gain attention army doctors became convinced that there was a new kind of syndrome presenting itself. News had finally come to the general and others who were aware of Project Continuum. They had a different theory as to the cause of the false memories. There was a growing fear that someone had beaten them to the punch with time travel and was rewriting history.

Not knowing where these bogeys are likely to strike and realizing they might be running out of time, Dannard gives the ship’s computer the choice of their destination from a list of hot spots provided by the general and it picks the sacking of Rome by the Visigoths. They arrive in earth’s atmosphere, centuries in the past. For just a moment they see a flash of something else in the sky, something that looked suspiciously like another ship. They document it in their log and begin their investigation. They quickly realize that something has gone wrong. The Romans seem to be using rifles and defeat the Visigoths, changing the course of history.

Shaken by what they have witnessed and the possible implications the team returns. Back at the base they discover that the world has changed, dramatically this time, and Rome never fell. Only the residual forces of the cosmic string enable the base to stay intact…but it’s only temporary. When the string fades, the base will as well.

Relaying what they witnessed everyone comes to a consensus that the other ship must have been responsible for changing history. Changes are already starting to become evident at the base, and it isn’t long before people start disappearing from time even as the team struggles to install a weapon on the ship. The new weapon is based on designs by Nikolai Tesla and it is hoped that it can be used to destroy the other ship without causing cataclysmic damage to the earth or the timeline.

In the middle of this things take a turn for the worse when the general confronts Dr. Alala after discovering that she had been trying to sabotage Project Continuum from the start. She confesses that she had been wanting the project shut down and that she had even chosen people that she thought would help contribute to its failure including Dannard. However, the unlikely crew have actually turned out to be the exact right people at the exact right time to save the world.

Dannard steps up and pulls everyone together. Just as they are about to leave, Lesley disappears. Without their cosmic theory string scientist there is only one other person left on the base who knows anything about how the time travel actually works and can take Lesley’s place on the crew. Unfortunately, that person is Dr. Alala. Dannard knows he has to do the impossible and put faith in her to do the job even with everything he’s learned about her.

With Dr. Alala on the ship, the team races back to ancient Rome, intent on arriving before the other ship. They only have seconds to get this right before the past that they knew is lost and their friends and family members at the base vanish completely.

The weapon works, but the device knocks out most of the systems on the ship and with only seconds remaining, they are able to return to their own time. The timeline is restored but it leaves so many unanswered questions. Who were the Bogeys? Were they acting alone or are there more out there? What else have they changed in Earth’s timeline? Is history truly what we know it to be? There is only one choice. The mission has changed. Instead of being simple observers, the Continuum Force must defend the very fabric of reality from these invaders.