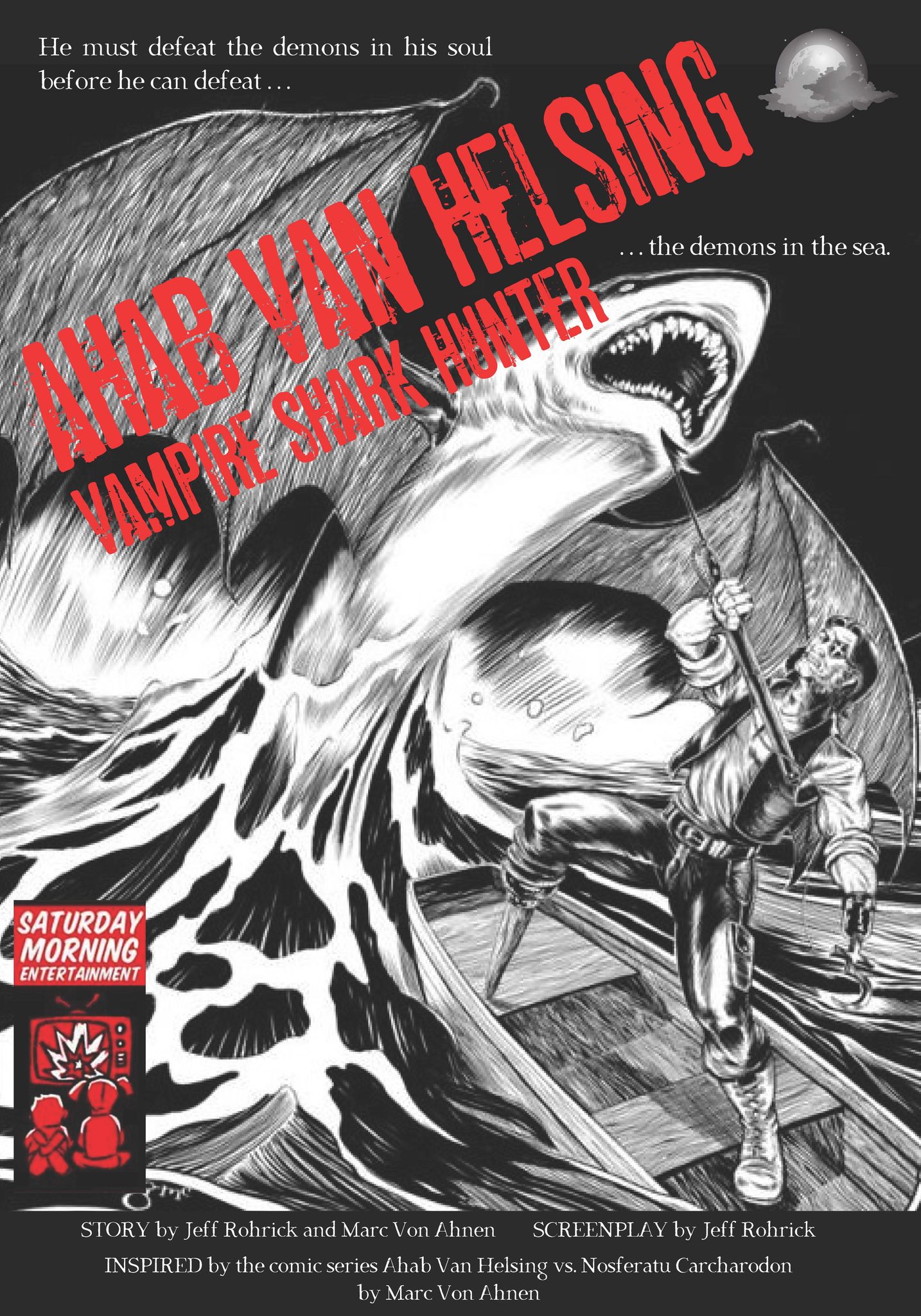 On the anniversary of his wife’s unsolved, supernatural murder, drunken sheriff Ahab Van Helsing must rally his town of misfits to battle a vampire shark and its aquatic offspring.

“When The Jaws meets What We Do in the Shadows, the result is an effortlessly wild and intensely fun genre-film mashup that is entertaining from beginning to end.”

The following morning, drunken sheriff Ahab Wangeheim rants about finally catching the vampire who murdered his wife 20 years earlier. Orphaned as a baby, he found refuge in his adoptive parents’ movie theatre, identifying with characters who were part man, part machine - Blade Runner, Robocop, The Terminator. He found purpose as a loving husband, but he’s now unable to envision a future for himself, burdened by the unresolved trauma from his past. As Ahab investigates the previous night’s vampire attack, he solves a greater mystery - he is a descendent of the infamous Van Helsing vampire hunters. With the possibility of solving his wife’s murder, he trades his whiskey bottle for his ancestral crossbow.

He leads the charge against vampire seagulls, tuna, lobsters, a wily octopus, and the Vampire Shark. His ragtag band of allies includes Thalmus, an old tugboat captain and apparent retired vampire hunter who is the only person in town who has ever believed Ahab's wild story about his wife's murder; Juliette, a marine biologist who studies aquatic defecation events; Quint, Ahab’s deputy, who flirts with the animal-loving hairdresser, Becca, by offering to rub her down with garlic; F.W., the wise old coroner who speaks in Southern euphemisms; and Vladimir, a nihilistic, German filmmaker and possible vampire.

The group adapts to the onslaught using wooden bullets and garlic water. Along the way, Ahab must rip out an eye when a vampire lumpsucker suctions itself to his eyeball, and he loses an arm to a vampire sawfish. When a cargo ship delivering specimens to Juliette is stranded on a reef, Ahab leads the rescue. Ahab gathers more evidence from the captain, a Japansese vampire hunter who Ahab has to kill after he's attacked by the wily octoputs. As the group battles the new exotic, aquatic vampires with the captain's wooden samurai weapons, Ahab concocts a successful plan to trap the Vampire Shark in the cargo hold, but he loses a leg from the tailfin of a thresher shark. As he sinks to certain death in an underwater graveyard, Ahab finds the final clue. Thalmus, the old tugboat captain, is the vampire who murdered Ahab’s wife. His identity is revealed when he’s caught in a massive beam of UV light from the lighthouse, created by a panel of seasonal mood disorders lamps constructed by the deputy and the hairdresser.

When he awakens in the hospital, Ahab is now part man, part machine, having been retrofitted with weaponized prosthetics provided by the North Atlantic Association of Vampire Hunters, who recruit Ahab into their ranks. Thalmus releases the Vampire Shark and rides the beast into an oddly prophecized final showdown, where Ahab unravels the mystery. A century earlier, the Van Helsing’s slaughtered Thalmus’ mother, one of the three Brides of Dracula. Having killed the entire bloodline, the sadistic Thalmus found more pleasure in slowly driving Ahab insane. As Ahab battles Thalmus, his allies take on the Vampire Shark using a school bus weaponized with wooden stakes, a la Road Warrior. In a final act, Ahab jumps out of the crumbling lighthouse, directly into the mouth of the Vampire Shark, peg leg aimed for the heart. When the debris clears, there’s no sign of the Vampire Shark – or Ahab. Only a few of his allies survive, and the entire horrific weekend captured in the German filmmaker’s documentary, Ahab Van Helsing, Vampire Shark Hunter.

I grinned at the poster and logline. I'll look for it on Netflix or the Dollar-bin. Good stuff.