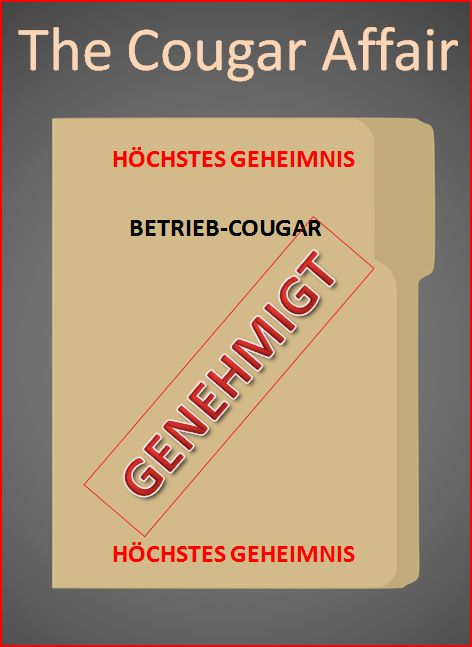 THE COUGAR AFFAIR
By Robert Sacchi

In 1967 East German intelligence has an office worker pose as a defector to give the CIA misinformation about their operations.

It is March 1967. At the East German Embassy in Beirut, Lebanon Werner Thom is going over a proposal for Operation Cougar. Max Menckhoff explains the plan. The plan is to send a carefully crafted letter to the CIA that is supposedly written by one of their office workers, Helga Kroll, 42, expressing her wish to defect and bring with her microfilm containing detailed information on East German operations in the Middle East. Werner Thom gives the go ahead for Operation Cougar.

At a CIA office, Frank Eisen, 32, tall, dark, and handsome, gets briefed on the situation. The letter appears to be from an immature woman. Frank’s superiors send him to Beirut to make contact with Helga and access the situation.

Elke Blume, 28, tells Helga about the mission Helga has been conscripted for. Elke makes Helga realize she spent the best years of her life in a dead end job.

In Beirut Frank Eisen makes contact with Lonnie Baker, a local CIA agent. Frank makes contact with Helga and immediately takes her to Paris. CIA operatives covertly take pictures of Helga in Paris. This gives Frank evidence to extort Helga’s cooperation should she change her mind about defection. Frank gives Helga the romance he believes she wants.

Helga, under Elke’s supervision, switches the CIA’s false microfilm with what she believes is an East German false microfilm. Werner has Max and Elke strip searched before they leave the embassy.

Helga meets Frank at the beach and she tells him she has the microfilm. They drive north then leave Lebanon by ferry and sail to Cyprus. In a hotel in Cyprus Elke sends an agent to retrieve the microfilm. In a struggle Frank kills the East German agent. After a verbal exchange with Helga Frank isn’t sure if it was an East German agent or an agent Lonnie sent to kill Helga.

They travel to Athens and stay at a hotel. Helga signals Elke and Elke calls and tells Helga to unlock the door. Helga unlocks the door. Elke enters the hotel room and at gunpoint demands the microfilm. When Helga gives her the film Elke tells Frank the bidding for it starts at $1 million. Elke shoots Helga and leaves. Frank stays with the wounded Helga. Max correctly predicted the American wouldn’t leave a wounded woman.

In a hospital room a wounded Helga goes over what happened with Werner Thom. She doesn’t believe Frank would have stayed with her had if Elke had the real microfilm. Werner agrees.

Elke kills Max then makes contact with Werner in a marketplace in Rome. Elke is shot down by a passenger on a motor scooter. Werner fakes that he retrieved the microfilm.

Thank you. I put uploading the script on the fast track.

Even though this is the type of movie I'd love to see, that is a huuuuuuuge Logline.

Brad Mason, on your advice I made it one long sentence. Thank you.