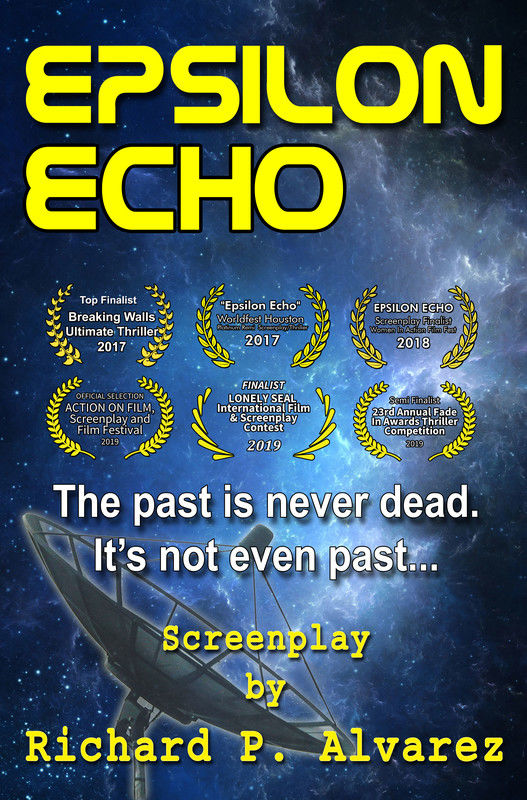 When a house-bound Astronomer discovers the echoes of past transmissions, she hadn't counted on uncovering secret government codes, or just how desperate the modern surveillance state would be to prevent their discovery. As members of her social group are attack or killed, she must survive a final confrontation and betrayal to make it out of her house alive. The past is never where we left it.

Brilliant and beautiful GENNY BEAMER hosts a regular game night in her modest home. The quartet includes BOB, a NASA programmer, KIP a closeted Astrophysicist and STUART the handsome aerospace engineer. Conversation turns to her newest invention the FRACTAL CONE ARRAY - which promises to revolutionize the world of radio-astronomy by putting the power of a giant array on the roof-tops of amateur SETI enthusiasts such as themselves.

When the game breaks up, Genny is once again left to confront her new reality alone - the agoraphobia that keeps her housebound as surely as the wheelchair keeps her grounded after her skydiving accident. In the silence of her study she continues her dual passions for scientific research and anonymous sexual encounters online.

An online gaming session with Stuart is interrupted by the reception of a possible signal, and the group convenes to determine the source of the spike. Kip is convinced it's an alien civilization echoing earth transmissions - while Gen thinks its old signals bouncing off a deep space anomaly. It is Bob who deciphers the signal, indicating that the source is a decades old coded message regarding the plot to assassinate President Kennedy. Alarmed by the revelation - Kip warns that their communications might be monitored.

It is only when Gen's bank account is frozen, her online sexual trysts outed, and Kip is suspiciously assaulted at a gay bar - that Gen begins to entertain the possibility that Kip's paranoia of "The Surveillance State" might be real. Afraid that they'll all be seen as conspiracy nuts - Stuart urges them to abandon the plot and reap the benefits of Genny's tech by licensing her patent to his Aerospace firm. A plan that Genny resists.

When an intruder breaks into Genny's home, the sexual assault turns into a bungled burglary after she fights off the masked assailant. But when Special Agents seize her hard drives as evidence, Gen seeks advice from Kip on how to publicize their findings.

On the verge of going public Bob is suddenly killed in a seemingly random carjacking. Devastated, Gen blames herself for Bob's death and seeks comfort at last in Stuarts arms. They consummate their online romance and she makes plans to license her patent to his firm.

In the afterglow of sex, a tell-tale injury and last minute text from Kip - tip off Stuart's identity as the masked intruder. When confronted, he offers Genny the choice of committing suicide or going the hard way. Either way - her antenna is not going to make it into the public's hands.

In a final confrontation of slashing knives and flashing sabers, Genny proves she is more than equal to the task of taking out an able bodied opponent and facing her fear of living her life beyond the threshold of her home.