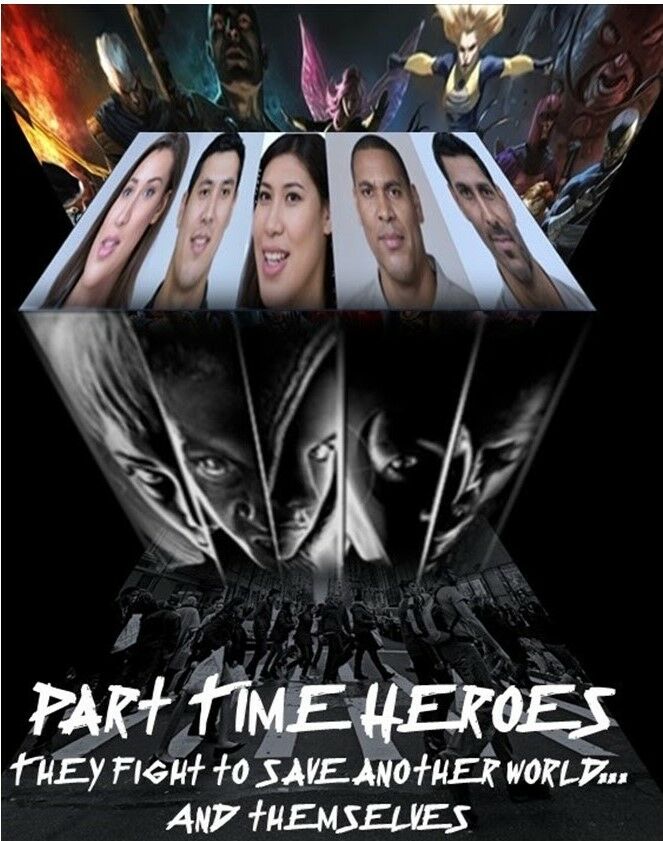 X men meets the Watchmen when a cynical bartender and four everyday people struggling for a meaningful life discover they’re superheroes- but only when in Earth’s alternate universe, where they can spend no more than 20 hours at a time, recruited to fight a super villain bent on taking over the parallel planet.

They fight to save another world...and themselves.

A serialized, 1-hour action, commercial drama where five people of varying ages and occupations discover they have superpowers when they pass over into an alternative version of Earth where superheroes are real. Due to a multiverse imbalance, they can spend no more than 20 hours at any one time therein before their bodies break down. Same also for anyone from Alt-Earth coming to our reality. The heroes there recruit them to assume the lives of their now dead twin to fight a malevolent superhero about to take over Alt-Earth. Each takes on the role, for various if not selfish reasons. It explores the themes of revenge vs justice, fear vs courage, betrayal vs redemption. Their unresolved issue: Why can’t I mean something?

A twist on the popular genre: This is a story of five ordinary people who happen to have superpowers. Not five people with superpowers who also lead ordinary lives.

Our PTHs only have superpowers on Alt-Earth, returning to their vanilla lives here where they have none, full of struggles to pay rent, get through class, unrequited love, and working thankless jobs and from which there is no apparent escape.

Young barback Stephanie, backup college QB Randy, older blue collar worker William, college freshman Claire and aimless Ezekiel all receive a cryptic invite from a Mr. Gary Trevino. At his stately home, he tells them he’s from an alternate reality of Earth where superheroes are real. He and a handful of superheroes are in hiding there since most have been killed, or allied with a malevolent superhero named Adrasta. Their only hope: Recruit from our world the biological twin of slain superheroes, who will have the same powers as their twin in "Alt-Earth" and train them to help defeat Adrasta.

Skeptical, Trevino leads them through a portal. They emerge onto Alt-Earth, where many things are the same, but some historical events and technology took different turns. There, superheroes once reigned supreme. Faction ridden, over time they coalesced into two groups: those joining Adrasta to bring order, although dictatorial, and the Libertines, who believe, despite the problems arising from a multipolar world, people and nations should be free to choose their own destiny. While most denizens there go on with their everyday lives, Adrasta is on the verge of imposing his idea of social order onto the planet, where his superheroes will guide -as “benevolent” rulers- the human race. After showing what life for Alt-Earth will be like under him, wavering, and facing a not too meaningful existence here, each decides to take on the roll, for various if not selfish reasons, and to escape their apparently meaningless, baggage ridden lives. All this while avoiding undue harm or death. They don’t work well together nor with some of the Alt-Earth heroes. To fight wrong, these everyday people must do extraordinary things, even if no one will ever know about it.

There are drawbacks. Due to a “quantum phase imbalance” between the realities, each can remain in the other for about 20 hours before their DNA starts breaking down, resulting in death, even superheroes, and need at least 30 hours to recoup. Here Alt-Earth superheroes have no power but suffer the same effects. And while our Earth’s people have the same powers as their dead Alt-Earth twin, they lack the same mind set or training. This, and maintaining their personal lives in our reality, present each character a life where, in our world, they are Joe/Jane nobodies, but superheroes on Alt-Earth.

Striving to defeat Adrasta, they perform mundane superhero feats: saving people from burning buildings, stopping terrorists and criminals, rescuing cats from trees, done to let Alt-Earth know they are still around, and regain trust. At times they must also assume the lives of their dead twin, to cover the fact the real one is gone. Complicating matters: Stephanie deals with her dead twins’ lover (who is also a superhero), William’s former GF is a powerful, anti-superhero Senator (and they dated there too), Randy’s twin was a suspected traitor (responsible for the deaths of some Libertines), Clair’s a supermodel (here she’s ungainly) and Ezekiel’s a mild-mannered librarian (here he dislikes books and loves the nightlife).

Just finished reading the pilot. Email you the very few typos I found. Those are the only notes, I have. Could not find anything wrong with it. Loved it, was just hoping you made a 60 minutes pilot of it. Our alternative superheroes decided to fight on alternative Earth and this first episode ends just before the first showdown. It's late over here so I send you the notes tomorrow morning, Dutch time.