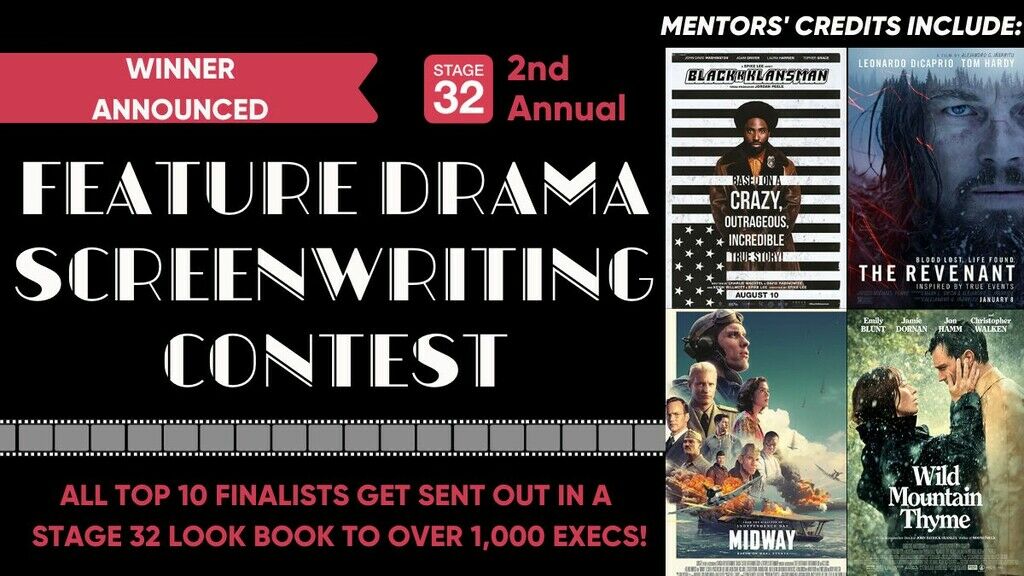 THE WINNER HAS BEEN ANNOUNCED!!!

CONGRATULATIONS AGAIN TO ALL FINALISTS!

This year’s Grand Prize Winner will be flown to Hollywood (travel permitting) to meet one-on-one with our judging and mentoring panel whose credits include the upcoming romantic drama WILD MOUNTAIN THYME with Golden Globe-winner Emily Blunt, Oscar-winning BLACKkKLANSMAN, Oscar-winning THE REVENANT, MIDWAY for Lionsgate, BREAKING NEWS IN YUBA COUNTY for MGM, TETRIS for Apple+ and more!

Drama, when done well, can elevate any movie genre. Feature dramas continue to be the cornerstone of entertainment around the world. And while other genres may go through trends of popularity, writing a compelling feature drama can launch a screenwriter’s career. Which is why...

“This is more impressive than most other contests I've placed in - Nicholl, Austin, etc. - so I'm really grateful and happy!”

The legendary writer and actor Gore Vidal told us, "A talent for drama is not a talent for writing, but is an ability to articulate human relationships." It is Stage 32's ongoing commitment to find incredible, undiscovered talent. We're excited to announce our 2nd Annual Drama Screenwriting Contest. This is a worldwide search for the best screenplays that take a deep dive into human relationships.

In this time of social distancing, we’re seeing relationships through a brand new lens and are looking for human connection. There has never been a greater need to explore the nuances of Drama than right now.

Drama is an exploration in complex character relationships and there is perhaps no more nuanced genre that can encompass many others. Projects like MARRIAGE STORY teach us that dramas can be hilarious, MOONLIGHT shows us an earnest and stunning piece of art, THREE BILLBOARDS... shows us a world that is dark and quirky, while 1917 reinvented the war drama. No two dramas look alike, but all of them dare to show us a different perspective of humanity.

What does the Winner Receive?

The Grand Prize Winner will be flown to LA (travel permitting) and meet with our Judge & Mentor Board including:

All Top 10 Finalists get incredible exposure to these major decision makers!

What Are We Looking For?

Remember that Drama has seemingly infinite sub-genres and we are open to them all. We want unique Dramas  that have something new to say to audiences. Whether your story is a Romantic Drama, Historical Drama, Horror Drama, Legal Drama, War-time Drama, Crime Drama - or anything else in between - our judges want to see it!

Our goal is to amplify your voice, give you the access Stage 32 is known for, and springboard your writing career to the next level!

Stage 32 screenwriting and television writing competitions have springboarded over TWENTY screenwriting careers! All of these writers have either been signed, optioned, or are now working screenwriters in the industry.

Some highlights from Stage 32 contest winners and finalists in the last 12 months alone include:

The Grand Prize Winner will be flown to Hollywood and sent on private one-on-one meetings with the panel of industry mentors from:

If you make the top 10, you still get massive exposure to decision makers!

ALL FINALISTS will be in a Stage 32 Look Book which includes their script title, logline & bio mailed to over 500 industry executives including, managers, agents, producers, development executives, and financiers! Stage 32 Look Books are some of the most sought after talent resources for the industry and have helped secure meetings with places like Verve, Good Fear, 3 Arts, APA, Echo Lake, Amazon, UTA, CAA, WME, First Friday, Pathfinder, The Cartel, Art/Work and many, many more.

These contests have produced some of the most sought after material from our finalists and winners. Requests for our finalists scripts have increased year over year and our winners have met face to face with a who’s who of working industry executives and gatekeepers!

Bradley Gallo is the co-founder and President of Film and Television at Amasia Entertainment. Helmed by the former president and COO of Marvel Studios, Michael Helfant, Amasia has emerged as one of the top production companies in the industry today.

Amasia which is the production company behind the sequel series DARK SHADOWS: REINCARNATION for Warner Brothers and the grounded reboot of the GREEN HORNET franchise, set up at Universal.

Amasia Entertainment is a production, finance and management company based in Los Angeles. They're behind films like CAREFUL WHAT YOU WISH FOR, FEAR, INC., THE ROAD WITHIN, THE CALL AND MR. RIGHT. Amasia is currently in pre-production on FATE, written by Gary Whittar (ROGUE ONE: A STAR WARS STORY, BOOK OF ELI).

Recently, Amasia opened up a bidding war for MY FAVORITE THING IS MONSTERS, with SONY picking up the project, which is now in development (see it on Deadline) and announced a new Television division led by industry veteran Tracy Mercer, formerly with Morgan Freeman's Revelations Entertainment (See it on Deadline here). Amasia just acquired the rights to the sci-fi feature WORLD BREAKER and the pilot DOPPEL (see more here).

Agustine Calderon is a Producer working in feature films and television. Agustine is a Co-Producer on TETRIS starring Taron Egerton for Apple+. He also just developed the feature drama CRITICAL THINKING directed by actor John Leguizamo.

He was previously an executive at a major production company with a co-financing and production deal at Warner Bros. His production and development credits include MAD MAX: FURY ROAD, THE REVENANT, BIRDMAN, READY PLAYER ONE, WONDER WOMAN, THE JUNGLE BOOK.

Agustine is also currently in development on a project with producer Beau Flynn, producer of REQUIEM FOR A DREAM.

Meagan A. Culberson is the Management Coordinator for Alta Global Media, a joint venture between Peabody Award-winning Manager/Producer Steven Adams and Theo Dumont that represents international talent, writers/directors, and media companies for the US Market. At AGM, Meagan helps manage international talent and media companies and helps clients develop their tv and film slates.

Theo Dumont has a tremendous amount of entertainment publicity experience. He is the co-founder and co-director of the Oscar-Qualifying HollyShorts Film Festival, Hollywood Comedy Festival and co-founder of the Mammoth Film Festival. Prior to Alta Global Media, Dumont was Head of Marketing at Buffalo 8 and Director of Corporate Communications at MGM Studios.

Michael Ewing is the Creative Executive at AGC Studios which just released the Heist Thriller LOCKED DOWN from director Doug Liamn.

Matt he sources new projects for the company while also supporting the Chairman and CEO. Most recently, ACG released the smash-hit drama MIDWAY directed by Roland Emmerich for Lionsgate, and will be releasing the drama BREAKING NEWS IN YUBA COUNTY with MGM, starring Mila Kunis and directed by Tate Taylor (THE HELP).

AGC is also currently in post-production on VOYAGERS with Colin Farrell and directed by Neil Burger (DIVERGENT Franchise).

The new studio’s Hollywood output has a wide-ranging multicultural focus, designed for exploitation across an array of global platforms including major studio partnerships, streaming platforms, traditional broadcast and cable television networks and independent distributors, both in the U.S. and internationally.

Olivia Hurd is the Development Coordinator at Amasia Entertainment, which is the production company behind the sequel series DARK SHADOWS: REINCARNATION for Warner Brothers and the grounded reboot of the GREEN HORNET franchise, set up at Universal.

Before joining Amasia, Olivia was at Heyday Films, the producers of A MARRIAGE STORY, GRAVITY, and the HARRY POTTER franchise. She was also in the writers’ rooms at FOX and CBS.

Amasia’s additional credits include MR. RIGHT with Anna Kendrick and Sam Rockwell, THE CALL with Halle Berry, and CAREFUL WHAT YOU WISH FOR with Nick Jonas and Dermot Mulroney. They are currently building out a robust Television slate in addition to their impressive slate of feature films.

Juan He is a Literary Manager at Pregame Content which has offices based in London and Los Angeles. Previously, Juan was a Junior Manager at Good Fear Content where he discovered many of the clients on Good Fear’s wroster by scouting talent from all over the globe.

In late 2018, Juan found a British horror director Alberto Marina and successfully set up his short film BAGHEAD at StudioCanal with Picture Co producing. The adaptation is now being written by Christina Pamies another screenwriter discovered through Stage 32.

Juan started his career in Universal Pictures Creative Development where he was involved in the development of features films such as JURASSIC WORLD, MUMMY, NIGHT SCHOOL and more. He later joined the world’s biggest talent agency CAA in their Motion Pictures department where he worked in representation, with a strong focus on director and writer clients.

In early 2019, one of Juan's clients, Diane Hanks had her project HICKAM submitted to Julia Roberts, Sandra Bullock and Steven Spielberg through CAA for production considerations. At Pregame Content, Juan continues to advocate for undiscovered voices from around the world.

Christina Pickworth is a Literary Agent at the UK-based, Imagine Talent. Christina founded the agency in 2012 to support writers and directors in telling their stories. She now works with a raft of brilliant clients, championing emerging talent and female voices.

Christina founded and runs the Writers’ Group for Women in Film & Television (UK), which supports new and established writing talent.

Christina has been on the selection committee for the BAFTA Rocliffe screenwriting competitions, she was also the assistant chair for the Fremantle UK New Talent Award, as part of the Women in Film & Television Awards 2012, and has been a mentor for First Light.