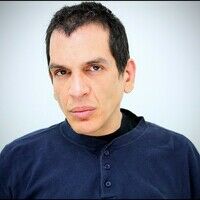 I recently edited and released a short film from footage shot 3 years ago. My intention in shooting was to get some experience using editing software. On my previous shorts I had always sat with my editor on all sessions but never hands-on with the software. I shot the film without a script, intending to find a story as we shot or in editing. I discovered a story with the other actors as we progressed through the day's shoot. Three years later, the story altered somewhat in the editing.

Three years later wasn't my intention but in a way it worked out for the best. I was three years wiser with more experience in filmmaking. It had been a year since I had released a film so to have something new to release even though the footage was three years old was a blessing.

As for the editing, it took me some months but not as long as I thought. I began with one program, Lightworks, but it wasn't working out so I broke up that relationship and went onto another program, Videopad. I wasn't sure how long it would take me to edit so I didn't use Premiere. I didn't want to have money dictating as is, usually, the case.

I'm happy with the film, I didn't go my usual route by submitting to festivals, I just uploaded it publicly to YouTube and Vimeo. So, I highly recommend digging up any old footage, editing it and putting it out there.

Hey, Johnny Zito! This is a fantastic post, thank you so much for sharing! And what a great exercise - thanks for the encouragement!

Thank you very much, Karen "Kay" Ross . Thank you, too, for recommending that I write it. Happy Holidays to you and yours!

Without a script, do you just take the footage you've shot and create the next part of the story for your next shoot? Or do you mean you just shot random footages and attempted to put them together in a way that makes sense -- you know, like stock footage storytelling?

K. M. Joshi it was all random. Shot in one day. If I began to see some pattern or shape emerge I followed. There wasn't a lot of intellectualizing. I just went with it

That sounds fun, Johnny Zito! I have seen quite a few projects like that that turned out to be a very unique piece of work, but I'm betting it needed quite a lot of brainstorming to find patterns.

And yes, it definitely is, Karen "Kay" Ross! The most difficult part must be in finding a way to link everything together. I recently watched a stock footage story on one of the lounge pages here; it was a pretty interesting work too.

K. M. Joshi , yes it was a lot of fun. No preconceived notions just allowing things to emerge. I had a great opportunity to learn a little from one of my fave filmmakers, Philippe Garrel, and a lot of his early experimental films were made in this same fashion. So, his methods influenced my approach to this project.