A short film I wrote and directed a few years back. Starring the late, great, Kevin Smith. 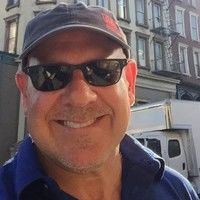 A famous violinist spends her days dressing up as a busker (street musician) and believes that sharing her music can transform lives. Note: "The Musician" was filmed as a silent movie, sound effects and music were placed in the film during postproduction. (The Musician contains no dialogue.) One Chicago morning, while playing on the Clark Street Bridge, the musician is approached by an intimidating security officer. Distracted during the confrontation, her prized violin is stolen by a small street child. Defeated by not being able to catch the child, the musician gives up all hope to recover her violin. She fantasizes about having her instrument back in her hands. At that moment she hears the plucking of strings in the distance. The musician follows the sounds to see the street child attempting to play. As the musician approaches, the child threatens to break the violin. Just then, the musician has an idea. She begins to airplay a violin using only her bow. Mesmerized, the child begins to imitate her every move. Soon the two are communicating through the passion of music. The child decides to give the violin back to the musician. The two continue to play and dance in the park using the sounds of music to lead them. When it’s time to part ways, the musician leaves, making her way to a performance. The child follows her and sneaks into the backstage area of the theatre to watch the musician on stage. At this moment the bond is complete and the musician has inspired another person through the magic of her music. At the end of the story, the child is transformed and left with the violin to pursue her own dreams of becoming a musician. This film stars and features the music of Anne Harris. The movie was shot within three days with on-location sound recording. All of the sounds were manufactured during the post-production process. Playing the child, this is Reese Harley’s first on-camera performance.