Born into a world of chance, it's quickly learned that the battle for existence depends on fast thinking, aggressive actions and an obstacle larger than life. Created by Andy Lefton Please visit... 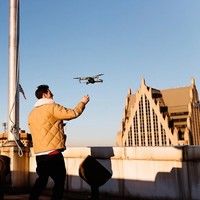 I've wanted to learn to 3-D animate my entire life. It took a seat in the back of the bus for most of my time here thus far, as filmmaking was a more effective means of creating for me. 5 Years ago when this short film idea came to me, I knew it would require far too great a budget to be feasible between the 3-D animation and many more effects based scenes. I put the idea in the back of my head and went on for years realizing the idea was becoming more and more important and relevant, as opposed to less... I couldn't let it take up space in my head anymore. Finally it was time for me to acquire this skill in order to bring this to life. I've spent the last 6 months learning about animation while I'm not shooting scenes for the film. This video was a draft rendering I did to test if my model was rigged and weight painted correctly. Even though this was a flawed first draft, it was still unbelievable to see something come to life from literally a single vertices. More importantly I realized I am capable of getting the effects to where they will need to be in order to bring this epic film to life. I am excited to try to find this film a home on one of the major streaming platforms.