Screenwriting : It's About Time I Made That Promise by CinemaShots 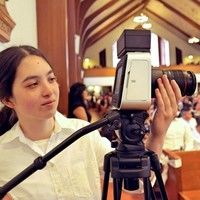 It's About Time I Made That Promise

It will be 4 years in July since my father has passed, and during it, I made him a promise. Still in high school/college and majoring in film and tv production, I said I would make a film about him and share it with the world. Now, at the time I might have over-exaggerated "sharing it with the world". Today, though it has been about 4 years, it feels like only a few weeks ago. His death was expected, but of course I was never prepared for it. I interviewed him, recorded him sometimes when he wasn't aware, and gathered what I could to form into a story. My father's name was Andrew Jackson. No not the president, though we are related. He was a musician. Composed his own music, and played acoustic guitar. In 2012 he was diagnosed with a brain tumor. Though surgery rid of it the first time, it then made a second appearance and was then diagnosed as a recurrent brain cancer. He was given months, and his dying wish was to be remembered and that his music be shared. In order to really commit, I recently quit a job I held for 2 straight years, saving up as much as possible, doing other sorts of side work related to film and photography, and putting together this script. Now that I have the committed time, the equipment, and the extra help, I think now I can finally share my experiences and my father's composed work as well as his life with people. I know it is what he would have wanted. It is very personal. Take it to heart, a lot of people seem to like the "real". I realize this sounds like some kind of documentary. In part, it is, but I've started putting together a script for it. In order to piece together my feelings, some suggest placing myself in the film as well. From back then and to now. I just hope this works out. Any suggestions?

Hello what is the story and why should your story be a movie? Who are these people who like the "real"? Are they gonna invest in your project or help? Perhaps a doc or a novel is your best path to healing. It s smaller to tackle yourself. Many real life stories are simply not interesting as a film (collaboration of many talents).

Not to trivialize your family's tragedy...but I think the best works -film/documentaries, novels/narratives/short stories/articles...about real-life death celebrate life/courage/purpose/character/uniqueness/hope, and juxtapose that with death/struggle/anger/acceptance, and maybe even denial. Showtime had a great series on a few years back, Time of Death....the documentary on Roger Ebert, Life Itself, was stunning...Joan Didion's books about her husband's and daughter's deaths, The Year of Magical Thinking and Blue Nights, are as profound, as it gets. There are many more. I think your biggest question - "what is this work that I am attempting to achieve really about?" - has already been answered by your father. "His dying wish was to be remembered and that his music be shared." How you choose to achieve that- your actual story line - is your objective. The content that you already have - videos; written works/interviews; remembrances; friends' stories; doctors' anecdotes; your dad's songs etc. - would become the basis for the story line, and the POV that you utilize. Is the story from your POV? Your dad's POV? Other people's POV? Documentaries utilize multiple POV's. A bio-pic can utilize multiple POV's, too. Are you going to attempt to make a documentary, based on what you already have and what you may add? Or are you going to write a bio-pic based on what you already have and experienced? Maybe it becomes a written bio-pic, or the documentary that you may be leaning towards, as you stated. You obviously have multiple POV's going on in this work. Deciding on the form and content, and the order of the story lines is going to be one of your biggest decision-making areas. What your dad goes through....what other's go through....processing the first battle that he endured...and overcame....its false victory....the recurrence....the devastation....how he lived in those final months....his eventual acceptance....how death humbles those who are dying....so many profound moments during those stages of loss and acceptance of one's own dying, and the stages of encounter by those around the person dying. And the celebrations...his achievements....his philosophy...what made him, him.....what he passed on to you and others...the fun times....the remembrances....the life and good times. You certainly have a lot to piece together - and not in a haphazard kind-of way, but as a well-crafted, choreographed story that can only be told by you, and as professionally and as well-crafted as possible. Again...I don't mean to trivialize this. Many of us know, and I also know what it's like to watch a once-healthy loved one die slowly; get a false hope of cure and recovery; and then get stricken again, only to die. My best wishes to you on your passion project, and I hope you can put together a story line, and in a format - documentary, bio-pic, or both -that captures the essence of your dad's wish, and his life and times as eloquently, profoundly and purposefully as possible.

It could be a novel, I'd like to try for anything, but I already have so much invested (tapes, music, talents). It is still a work in progress. I know I would try submitting it into a film festival. Perhaps just start off with youtube. He was a musician, and certain people knew of him, I assume musicians alike would relate and be interested. Again, I have yet to decide, but ideas don't hurt.

Well Dan Maxx, ofcourse it's not a real life story, i made it all the way interesting and thrilling according to the viewers of today's generation.. Hope you would like it, or i can say you will definitely love it..

Bill, thank you for the comment. I am trying every possible path. So far, I believe I can make it happen in terms of filming it. It is hard to explain exactly, but once the script is finished, perhaps I'll share it. So far, those who have offered to help seem to like the ideas, and the writing. If it doesn't work out, well, the experience and the learning experience matters. Doesn't hurt to try.

Lauren, BILL and I always capitalized his name, cause HE'S great) gave the best bullet points advice. The POV angle is excellent. A few years back Jennifer Lopez and her then husband, produced and acted in a biopic about famous Salsa Puerto Rican, singer, who died from AIDS and drug use. My point is the screenwriter / Director they finally hired after multiple failed rewrites, presented the film from the POV of "El Cantante" the title of the film, but the film was narrated by the first surviving ex wife of the Singer. She also sold the rights of the story to Lopez, who played her in the film. Again BILL, is right on point. El Cantante, is in English, might help you to check it out, for free on YouTube, if is still there. Good luck. I'm here for you. My first screenplay is loosely based on my own struggles as a bullied, scared, gay teen in the '70s here in NYC.

Lauren: Here is a link to the trailer for El Cantante, the full film is not available, but in the trailer you get an idea of the narration of the story, lead character played by J. Lopez. https://m.youtube.com/watch?v=3rze2GO3Lnk

If a topic is bursting with emotion, it shows up in the writing. All the very best of luck with this. Write.

Thank you Bill and Jorge, I watched the link. I like it, and I'll learn from it. Thank you David.