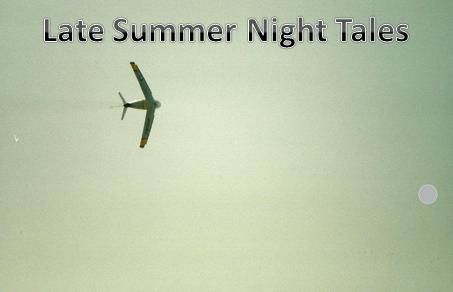 Uncle Bill likes telling tall tales to the children on the block.  He claims one of the tales is true.

John gets a call from his aunt asking if he wants to pick up some of his late Uncle Bill’s mementos.

This reminds John of when he and his friends would listen to Uncle Bill’s tall tales. Uncle Bill will say the last story he was going to tell was true.

In 1955 Uncle Bill was an Air Force pilot. He and the other pilots saw a training film that had a German pilot from World War II recount some of his dogfighting experiences. Bill paid close attention to what the German pilot was saying.

Bill is at the officer’s club. One of the men at his table is drunk and loud. This drew the attention of two colonels.

The next day Bill and another pilot are on a flight over the desert. Bill spots a UFO. Soon Bill and his leader are in a dogfight with the UFO. The UFO destroys the other plane. Uncle Bill manages to destroy the UFO.

When John was 15, he still liked listening to Uncle Bill’s tall tales, albeit from a distance. John has long since realized almost all his stories were take offs from fantasy movies. John’s mother and father are arguing about money. John’s mother wants his father to fire Bill. She considers Bill dead wood. John’s father refuses to fire his brother.

Bill returned to base. His leader was dead. Bill’s plane was a write off. In the process of destroyed the UFO power lines were damaged. This caused a local power outage.

John and his son, Lyon, read Uncle Bill’s accounts in the flight log and diary.

The debriefing included the two officers that saw Bill at the officer’s club the night before. Bill is given the choice of resigning for the good of the service or a court martial.

John mounts a picture of Uncle Bill in a flight uniform on a wall in John’s house.