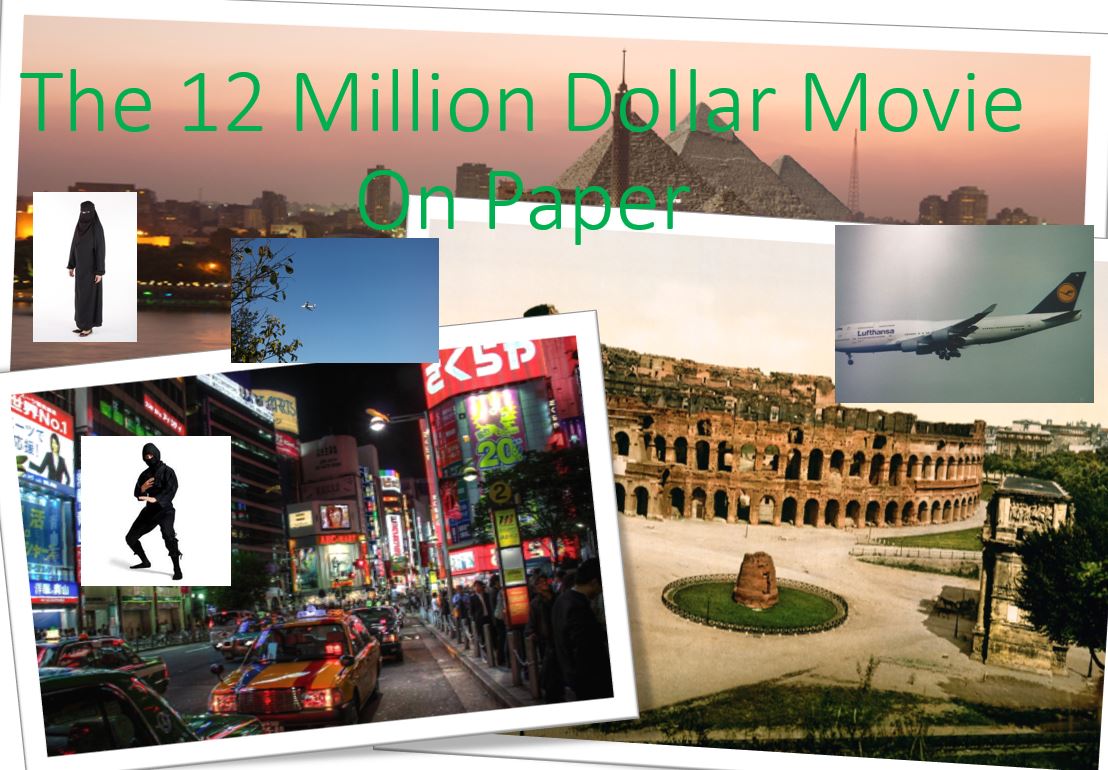 THE 12 MILLION DOLLAR MOVIE ON PAPER
By Robert Sacchi

A “B” movie actress gets conned into getting others to invest in a movie.  The con artist has disappeared and the actress does what she normally does in a crisis.  She goes to her cousin, whose husband is also
a fan, for help.  The husband comes up with the crazy idea of making a movie so the investors won’t know they’ve been scammed.

James and Nancy Davis are having a routine evening at home. James is watching an old “B” movie starring YOLANDA ALDRICH, Nancy’s cousin. Yolanda comes to the house. Nancy knows Yolanda only comes when she needs help. Yolanda explains a swindler duped her into getting money from people to make a movie. The $12 million she took from the backers and the swindler are gone. Yolanda balks at Nancy’s advice to go to the police. James suggests they put some footage together to make it appear a legitimate effort was made to make a movie.

Yolanda and James, with Nancy filming, attempt a PG bedroom/assassination scene. After some falls, and other predictable mishaps, they complete the scene. Nancy hopes James and Yolanda would realize the futility of the effort. James throws himself into making the movie. Nancy, a CPA, proceeds with making phony set of books to account for the $12 million. James films scenes in public places and uses other tricks to give the appearance of a film make in numerous locations. He uses household items for props. He throws in scenes to use up film time. He, Nancy, and Yolanda obscure their faces to hide the fact there are only 3 people in the movie. James is naturally clumsy but he is undaunted by his numerous setbacks that Nancy is quick to emphasize to him.

Nancy confronts him by pointing out he is putting in great effort in a useless endeavor. James retorts that he knows he is taking the right course since Nancy hasn’t been able to come up with anything better. Nancy tones down her criticism. Nancy tells James and Yolanda she is writing a set of books for Yolanda in case someone asks where the $12 million went.

James concludes they will need a leading man and a leading lady to complete the movie. Yolanda points out she teaches an acting class so maybe they could use two of her students. They make the acting choices based on looks rather than talent. Nancy points out they have to pay them at least scale and take other measures to prevent these novice actors from figuring out the movie is on a micro budget. James devises a cover story where they tell the novice actors most of the other scenes are filmed by different crews on location. They use a couple of tricks to add credibility to the claim.

Nancy manages to account for $12 million. James feels obligated to complete the movie. He gets enough film footage to declare the movie complete. James convinces Yolanda she has an obligation to make an effort to sell the film. While James at work Nancy takes the initiative and films the closing credits using her credible dance and computer skills.

Yolanda informs James and Nancy she convinced a friend to send the movie straight to video. At Christmas Nancy tells Yolanda and James the movie has made enough from video sales to pay back the investors. They’ve made a few cents extra for James and Nancy’s percentage of the net. Yolanda tells them James and Nancy one of the investors was interested in financing another of their movie projects. James is excited but Nancy tells him “no” in numerous languages.

THE 12 MILLION DOLLAR MOVIE ON PAPER