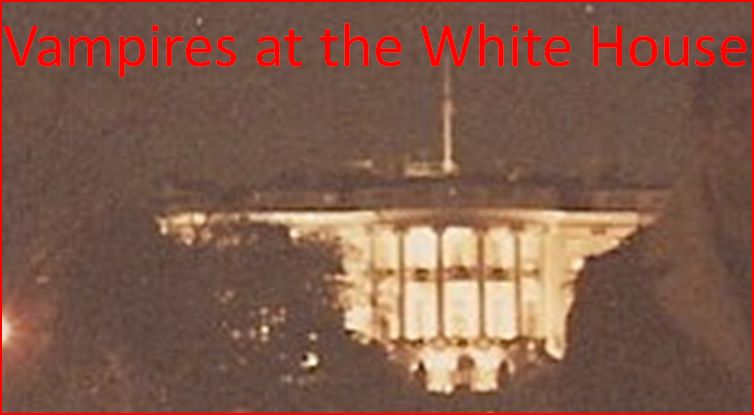 VAMPIRES AT THE WHITE HOUSE
By Robert Sacchi

The newly elected President of the United States is on his first overseas trip as president.  He is turned into a vampire and over the next 4 years keeps his vampirism a secret except for those close to him.  He is running for reelection and it is becoming harder for him to keep his secret.

Vampires at the White House - Synopsis

There is an affair in Romania. The womanizing President meets a gorgeous woman, Larisa, and they go to her abode. There she turns him into a vampire. On the flight back to the U.S. the president turns the frumpy and domineering First Lady into a vampire.

The First Lady changes her wardrobe and makes herself look more attractive. All is going well with the country. The President and First Lady keep their secret despite the oddities in their behavior. Normal people know there is no such thing as vampires. The mid-term elections are near and Aaron, a political advisor, is going over the latest polls in the oval office. While Aaron believes the polls look good. The First Lady isn’t satisfied. She unnerves Aaron when she tells him they could do better. Larisa flies into the Oval Office as a bat then changes into the gorgeous woman. Aaron makes a run for it but the secret service agents, who are also vampires, grab him. As Larisa is giving her marching orders the First Lady rams her wooden healed shoe into Larisa’s chest. This turns Larisa to dust. The President tells Aaron what happened has nothing to do with politics so Aaron should just go about his duties.

Aaron tells some other campaign advisors what happened. The junior advisors don’t believe the incredible story but the senior campaign advisor realizes The President and First Lady being vampires explains their eccentricities. He convinces Aaron and the others they should carry on as before. What the first couple are has nothing to do with politics.

On the flight back to the U.S. The President, First Lady, and their campaign staff have to come up with a plan to deal with the situation before the plane lands. The initial idea is complete denial. That plan doesn’t seem practical so they choose to admit the truth and attempt to convince the public The President’s vampirism changes nothing.

The President’s supporters go on the talk show circuit and explain the economy, not vampirism, is the real issue. Among their tactics is to claim The President probably isn’t the first president who was a vampire. The president wins reelection.

During the inauguration The President asks Aaron to get to work on proposing a change in the constitution so he can run for a third term. Aaron sets some of the groundwork to put the constitutional amendment in motion. The First Lady tells Aaron she wants to run for president in the next election. Aaron tells her The President has already asked him to put the wheels in motion so The President could run for a 3rd term. The First Lady runs her fingers down the wooden heel of her shoe as she purrs; “Start preparations for my presidential bid, I’ll discuss the matter with my husband.”

VAMPIRES AT THE WHITE HOUSE