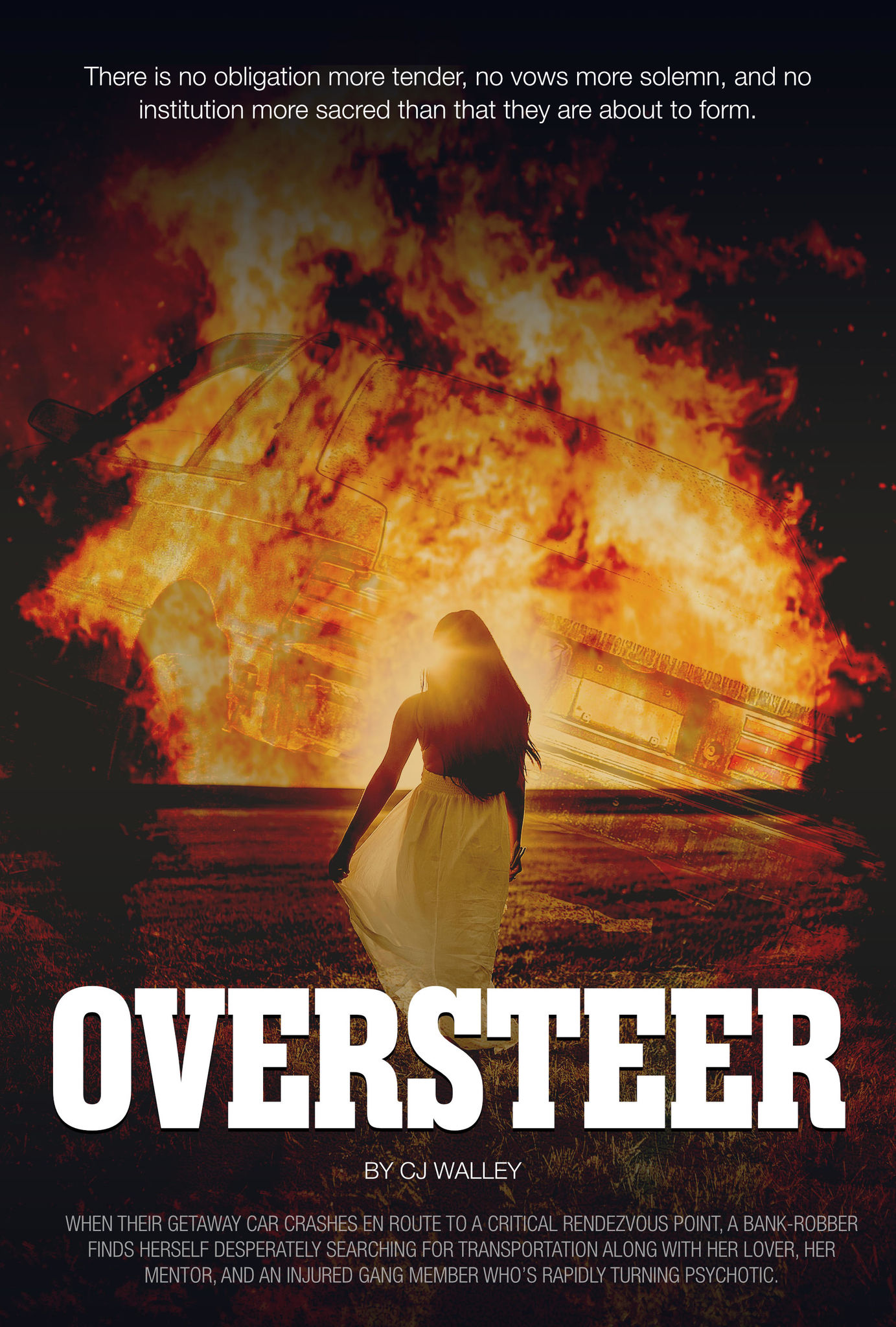 When their getaway car crashes en route to a critical rendezvous point, a bank-robber finds herself desperately searching for transportation along with her lover, her mentor, and an injured gang member who’s rapidly turning psychotic.

A desert road. Two peaceful individuals in the backseat of a stationary sedan. This is MARY and CLARENCE dressed like a bride and groom but all is not as it seems. Their getaway car has crashed into the only other vehicle as far as the eye can see and their partners in crime, WINSTON and RICHIE are trying to cover their tracks. The Gang leaves the scene on foot, talking about trying to catch a flight over the border and Richie, who’s carrying a briefcase full of cash is hiding a secret, he’s bleeding from his ears. They find a diner and try to act normal despite their personal grievances, including those brewing between the new husband and bride. They find a pay-phone to delay that plane ride but Richie passes out alone, resulting in him being picked up by ANGEL, a hardy cowgirl who takes him back to her family farm, leaving The Gang with a new problem to tackle.

We cut back to what must be earlier in the day where Mary and Winston are walking through a town wearing ridiculous looking mascot costumes and talking about her relationship problems with Clarence. Winston is like a father to her and promises he’ll do anything to help her find a normal life. They then enter a bank and hold the place up, their kevlar lined costumes allowing them to take out the guards. Clarence and Richie soon arrive to help execute the plan which is to hack the teller machines using a supercomputer and steal millions of dollars electronically. During this, Winston has to deal with the town’s maverick POLICE CHIEF and Richie who is clearly a sadistic psychopath and needs to be pacified with physical cash stuffed into a briefcase. Then a twist, Mary approaches Winston about honoring that promise.

Winston has to negotiate with the Police Chief over a new set of demands and we follow officers on a mad dash to pick up various items; flowers, black suits, a white dress - it’s all for a wedding. Clarence has finally committed. He’s proposed to Mary and she wants to get married there and then during the heist. A local REVEREND is rushed to the scene and sent in to preside over the ceremony for which The Gang, The Police, and The Hostages put their differences temporarily aside to make sure is done with the utmost dignity. It’s a romantic wedding but it’s clear that Mary has her doubts about Clarence being the right man for her. With that over, everyone gets back to business and, with Winston leading them, The Gang fight their way out in a huge shootout.

We fast forward to where we left off. Richie awakens to find himself being taken care of by a MOTHER in a ranch house while Mary, Winston, and Clarence soon arrive looking for him, running into the aggressive FATHER in the process who finds them all highly suspicious. Sadly, since Angel has taken her Pickup into the fields to work, they are still lacking transportation and, due to Richie’s failing mental state, no idea if he made that call to buy them more time. Mary and Clarence search the farm looking for Angel but can’t avoid arguing about the issues in their relationship before they have sex in the crops, concluding for Mary at least that they’re bad for one another. Meanwhile Winston has stumbled upon a classic Firebird in a barn and, realizing Richie is too incapacitated to do his dirty work, has to kill the Father to obtain the car and get The Gang out of there.

Fleeing the farm, The Gang head to the rendezvous point in the hope they might just make it but arrive at a quarry to find no plane and a warning sign they have bounties on their heads. Now desperate for medical attention and holding the only thing of any value (the briefcase full of cash), Richie double-crosses his team, preparing to execute them and take the Firebird. However, little do they know, Angel has been alerted to what’s going on and, seeking revenge for her dead father, has stalked them to the quarry while armed to the teeth. A shootout ensues with Angel interrupting the execution and causing chaos, resulting in Clarence being killed and a duel taking place where Mary, accepting that she has a responsibility as the best of a bad bunch and with Winston by her side, finally manages to take down the evil and psychotic Richie. Sadly, Winston doesn’t make it, leaving Mary both without the husband she now accepts she actually did love and the father figure devoted to her protection. After making her peace with Angel over the blood that’s been spilled, she heads home looking for redemption and to take care of what really matters.

easy to relate and fun :)