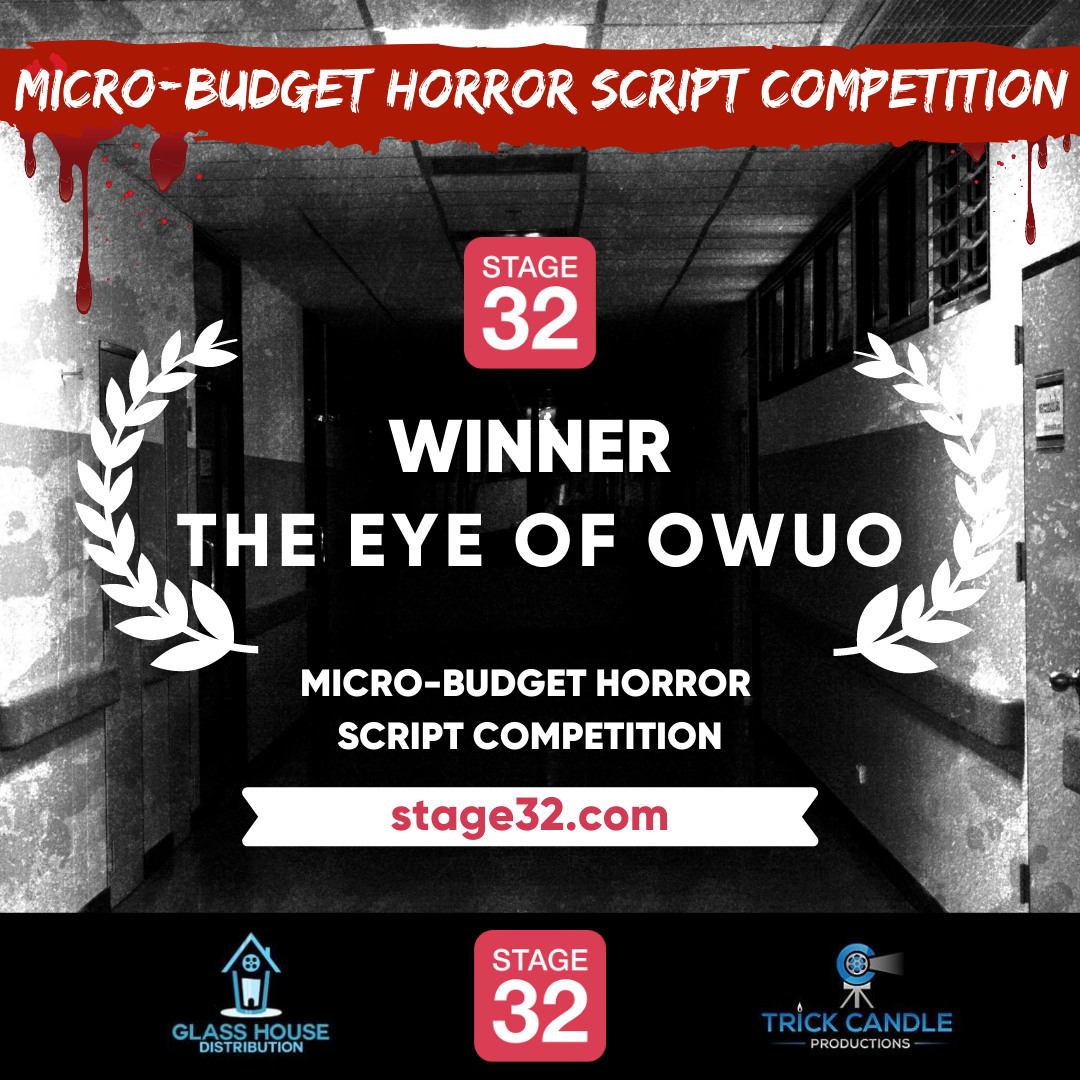 THE EYE OF OWUO
By Martin Reese

A desperate mother uses ancient African magic to resurrect her daughter, and then realizes that the price for keeping her daughter alive entails taking the lives of others.

Jacqueline Harris is the 30-something year old wife to a loving husband Ron, and the mother of two beautiful girls Willa and Kayla. She is a successful executive at a large engineering firm. Jacqueline is smart, well-liked and a consummate consensus builder. Jacqueline, one could say, has it all. That is until her youngest Kayla is killed by a distracted driver. Jacqueline is sent into a tailspin. She takes time off of work. Her family life suffers. But over time and with therapy Jacqueline begins to recover and return to a semblance of a normal life.

After the passing of her father Jacqueline comes into possession of an African talisman that she finds in his house. What she doesn’t know is that the talisman had only recently been sent to him and was the cause of his death. She decides to learn more about it by going to an establishment that specializes in African artifacts. There she meets Abiki who tells her that the talisman is called the Eye of Owuo and it is cursed. It is said that whoever possesses the talisman is given the power over life and death, but at a heavy price. Abiki tells her to get rid of it because it can only lead to tragedy. Jacqueline doesn’t believe it.

Later a young woman named Tina, who had befriended Jacqueline’s father, is murdered. The murderer, Higgins, is caught. The talisman demands a life which triggers Jacqueline to wish that Higgins was the one who died and Tina had lived. This wish causes a manifestation of Owuo, a shadow demon, who steals the life of Higgins and resurrects Tina whose body was lying in the morgue. The story of Tina’s resurrection and Higgins death is all over the news, but Jacqueline chalks it up to coincidence after news reports claim Tina was not actually dead in the first place. They say she had suffered from a severe form of catalepsy which threw her into a near death catatonic state triggered by her assault. Higgins died in a prison that was infamous for inmate fatalities.

One night Jacqueline’s daughter Willa falls seriously ill and dies in the hospital. The talisman demands a new life. In her grief Jacqueline wishes that her office rival, Tara, who had undermined her in an important office meeting, was dead instead of Willa. Owuo kills Tara and Willa comes back to life.

Jacqueline now believes the talisman works. Later Jacqueline finds out that Tina has died. She realizes that Tina died because there wasn’t a new life traded for hers. The same will happen to Willa. The talisman demands a life. Jacqueline gives it a drug dealer and he is killed by Owuo.

Jacqueline confides in her best friend Carmen. Carmen doesn’t believe her, but does what she can to humor her. Jacqueline and Carmen revisit Abiki to find out how to break the curse. Abiki says that the only way to break the curse is to stop using the talisman even though it would mean letting Willa die. Constant use of the talisman means that others have to die and eventually the talisman will only want those lives closest to Jacqueline in exchange for Willa’s life. Life has value. The closer the life is to the user the more value it has. The only other alternative is to try to destroy the talisman.

Ron confronts Jacqueline over her erratic behavior. He thinks she is relapsing into mental illness. He blames the talisman and attempts to get rid of it. Once again the talisman demands a new life and wants Ron. Jacqueline initially gives Ron to Owuo who begins taking his life. Then Jacqueline stops Owuo. She finally decides what has to be done to stop the curse. She makes a bargain with Owuo. Owuo can have her life, the most valuable life, if he lets Willa live her full life. Owuo accepts and takes her. Ron is left in a catatonic state due to much of his life force being siphoned from him.

At the gravesite of Jacqueline, Willa is there with her grandmother Emma. Willa is wearing the Eye of Owuo which Emma gave to her because the talisman was so important to her mother.

As an African reading your 2nd logline, your work is very exciting for me Martin. This one sounds like an old African tale and I love those. I love reading the books that curated by mythology linguists who seek out the stories and publish them. I started reading the books when my grandfather was old and sick and he could no longer tell us the stories anymore. This logline sounds like a story I was told once upon a time, by some elderly person when I was still a child but I have yet to read it in a book. I get the feeling that both your scripts will do well, people want to hear African stories now. All the best.

Oh, I forgot to mention that I can't stomach horror though. But still... do your thing.

Thanks for the encouragement. Ally. One of the of things I am working on is writing stories based on African myths. African mythology is so rich. And to be honest it has some pretty creepy monsters.

You're welcome Martin. You're certainly on the right track, as someone who knows African mythology very well I applaud you for taking it mainstream. I am still caught up in the spectacle of being wowed by hollywood stories since my mom bought our first TV when I was eight, I've yet to utilize my knowledge of african mythology when writing scripts, but I hope to benefit from its richness one day.

Yeah there are a lot of creepy monsters in African mythology... creepy monsters and animals. I love the animal fantasies, even though most ot them are creepy anyway too.

Your synopsis is strikingly horrific and also so commercial to a wide audience. It reminded me of the 4th short story to Tales from the Crypt (1972) regarding being careful with your wishes not understanding the cost can be too steep. I would love to read your spec one day and hope to see it produced into a feature. As you said don’t give up on your dreams.

Nice reference of Tales from the Crypt (1972,), Peter. Still one of my favorites.